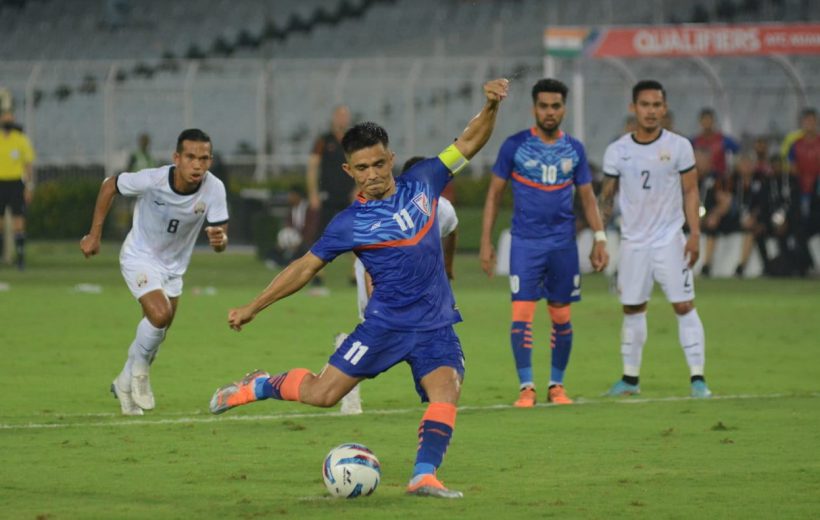 It was a blistering start for the Blue Tigers yesterday at the AFC Asian Cup 2023 Qualifiers. Igor Stimac’s side got the better of Cambodia with a convincing 2-0 victory. The gaffer called for fans to come in support, and 26,000+ samaritans gathered in the stadium.

“The way the fans supported us is outstanding. It does not matter which tournament if a game is happening in Kolkata, it is always a great atmosphere. Hope the fans went home happy tonight,” exclaimed the talisman, Sunil Chhetri, whose brace won India the game.

Looking back at the fixture, here are the talking points that team FootballCounter noted:

India’s start was robust while keeping the ball and distributing evenly. Despite certain mashups in the midfield, the Indian outfit was quick enough to intercept and launch quick counters. In the first half, team India attempted around six shots. However, as it seemed, there were opportunities for more. India needed to capitalize.

Back in 2007, when India played the Nehru Cup, Chhetri’s brace against Cambodia was the difference between both teams. It is 2022 now. And nothing has changed. Chhetri’s brace helped India gain three points, taking his active goal-scoring tally to 82, just two behind Hungarian superstar and the sport’s all-time legend Ferenc Puskás.

Sunil scored his first goal in the 12th minute from a penalty. His astute kick at the left corner left the stadium in a frenzy. The Indian skipper rose to the occasion again in the second half. Brandon initiated a cross from the left flank, and Chhetri’s header found the net in the 60th minute. India ended winning with a two-goal margin.

Liston Colaco: A star in the making

The 23-year-old’s prowess with the ball is not a surprise anymore. Having had a fulfilling outing for ATK Mohun Bagan last season, Liston maintained his confidence for the national team as well.

The dynamic duo of Sandesh and Anwar

After multiple challenges on and off the pitch, both Sandesh and youngster Anwar stood tall for India. Sandesh faced many injury-related problems over the past months. It also caused him to terminate his contract with Croatian club HNK Šibenik. Similarly, Anwar’s rare heart disease distanced him from the beautiful game for quite a while, and COVID added havoc to it. Bouncing back from the hurdles, both the defenders proved their mettle for the national squad yesterday and kept the Cambodian attackers at bay.

The Indian football team plays their next game against Afghanistan on 11th June at the VYBK Stadium, Kolkata. Afghanistan lost 2-1 to Hong Kong in their first Group-D fixture.