Despite going a goal down in the initial stages against Gujarat, defending champions Services showed grit and reliance to record their first win in the Hero 75th NFC for Santosh Trophy 2021-22. They beat Gujarat 3-1 in Group B.

Stung by their loss to Manipur in the opener, Services kicked off with clear intentions be in charge. Gujarat by contrast were happy to play on the counter, defending deep and in numbers.

Services’ first real opportunity came off a mishit cross from the left by Arashpreet Singh, looping over towards Gujarat’s goal. A firm hand by Ajmal Eranjhikkal saw the ball tipped over the bar.

Services kept the tempo up, Pintu Mahata and Tongbram Krishnakanta Singh the architects in midfield. Mahata in particular constantly dropped deep to pick up the ball and provide a fulcrum to the midfield.

Despite their overwhelming possession though, Services struggled to create much of note through the half, their forwards’ ineffectiveness continuing from the previous game.

In the 12 minute, Christopher Kamei’s shot from distance was saved by Eranjhikkal in Gujarat’s goal and from the resultant corner the goalkeeper, despite an initial error managed to gather a weak header on goal.

Seven minutes later came the breakthrough, albeit not in the way Services imagined it. Against the run of play, Gujarat pressed forward, winning the ball in midfield before Pranav Kanase danced his way into the box on the right. The winger played a delicate cross in, through the legs of the Services defender in front of him. An onrushing Jay Kanani made no mistake tapping the ball in first time from five yards out to give Gujarat a shock lead.

Services were rattled. Not too long after, Gujarat could’ve doubled their advantage. Kanase gathered a long ball from the back and ran through alone towards goal. His resultant shot though was deflected by a backtracking defender and looped mercifully wide.

Gujarat would rue that miss. Services pushed forward in numbers to level the game. Mahata dribbled past three Gujarat defenders to set himself up for a shot from outside the box. His shot hit the upright, and the one from the rebound was offside.

Just as Gujarat thought they would take the lead into halftime came the equaliser. In the second minute of injury time, after some neat wing play, the ball fell to Nikhil Sharma, in the six yard box. The youngster scored to ensure the teams went even into the break. 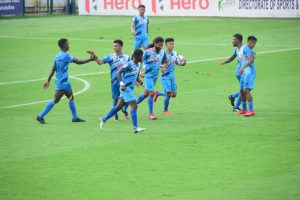 Services’ second half performance was more measured, and tactically more aware too. Right from the start they capitalised on Gujarat’s inexperienced wingbacks. In the 49th minute, Nikhil danced in past the defenders on the right, setting himself up perfectly for a left foot curler only to see it deflected off target. The ball, unfortunately for Gujarat, fell in the path of Krishnakanta Singh, who slotted into an empty net to give Services a deserved lead.

From thereon Services controlled the game, happy to hold possession and keep Gujarat at arm’s length and do enough to keep carving opportunities for themselves.

In the 85th minute, Services ensured the result. After a long period of sustained pressure a cross from Vivek Kumar on the left found Mahata who headed the ball perfectly to give Services a third goal. As he wheeled away in celebration Services breathed easy, knowing that they finally had points on the board and a chance to defend their crown.