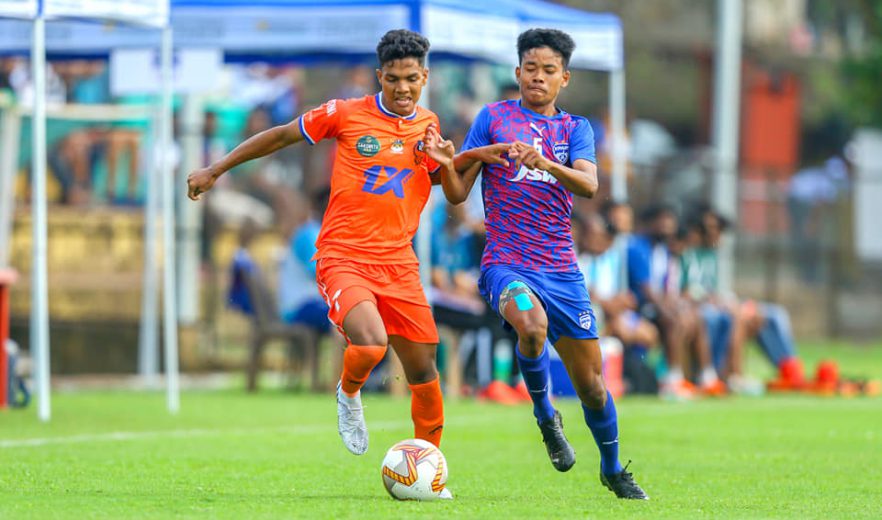 Bengaluru FC made it two wins in two games with a 2-1 victory over FC Goa while Jamshedpur FC held Chennaiyin to a 2-2 draw in two pulsating second-round encounters at the Reliance Foundation Development League (RFDL) here on Tuesday.

Bekey Oram (11th) and Rahul Raju (87th) scored for the Blues again as they moved to the top of the table, cancelling out Brison Fernandes’ 17th-minute strike.

Meanwhile, Chennaiyin came back from a goal down to make it 2-1 with second-half goals from Joseph Lalvenhima (51st) and Suhail Pasha (88th penalty) after Sorokhaibam Nongpoknganba Meitei (45th) gave Jamshedpur the lead. But it was heartbreak for the Marina Machans in the end as substitute Lalruatmawia (90+5′) smashed home from a header inside the area to share the spoils.

It was Bengaluru who started on the front foot, not taking long to nose ahead. The ball broke to Siva Sakthi who dodged past a defender inside the area and cut back for Oram to slam home from close. The backline were guilty of ball-watching and leaving Oram free as the midfielder got his second goal in as many games.

For the Gaurs, Jovial Dias looked impressive once again, running the channels from his wide right position and testing the dogged Bengaluru defence to shoot inches wide of target moments after going down by a goal. Bengaluru’s joy was short-lived as Goa equalised inside six minutes, largely due to their rivals’ lapse in concentration at the back. Brison Fernandes, another player who has impressed in the middle of the park for Goa, robbed Amay Morajkar of the ball after Jagdeep Singh dilly-dallied in possession deep inside his own half.

Brison then slipped in between Jagdeep and F Lalremtluanga to enter the box and unleash a thunderous effort past goalkeeper Sharon and into the far post.

Both teams went into the break locked at 1-1. After the breather, Goa looked a far improved outfit with Jovial not letting the heat get the better of his industry in the final third. Bengaluru lacked the cutting edge they had in the first period as Jovial missed two chances of scoring, first dragging wide from a good angle and then finding the keeper after making a darting run through the middle. Against the run of play with three minutes of regulation time remaining, Bengaluru took the lead.

Siva Sakthi found substitute Emboklang Nongkhlaw inside the box with a sublime dinked pass for him to shoot on goal. Goa keeper Hrithik Tiwari failed to hold on to the ball at his near post with Raju latching on to the opportunity to stab the ball into an empty net.

Later in the day, Chennaiyin started the brighter side and kept creating chances only to go into the break with a goal down as Jamshedpur scored against the run of play. Piyush Thakuri, who scored a brace in the last game, swung in a looping cross to Meitei who beat his marker to nod in past Samik Mitra who should have done better in Chennaiyin goal.

In the second half, Chennaiyin equalized early when Johnson Joseph delivered a slide-rule pass for Joseph Lalvenhima who sneaked in between two defenders to stab home.

Sufiyan Shaikh and Johnson came close to scoring before substitute Rahul Manjula was brought down inside the box by the Chennaiyin keeper for the referee to point to the spot. With two minutes left on the clock, Pasha converted with aplomb from 12 yards. But all was not over as Lalruatmawia scored for the Red Miners.

Carlos Pena: It’s the perfect time for me to return
Services come back strongly to beat Gujarat in 75th Hero Santosh Trophy