Sudeva Delhi pip Kenkre to finish Phase 1 with a win 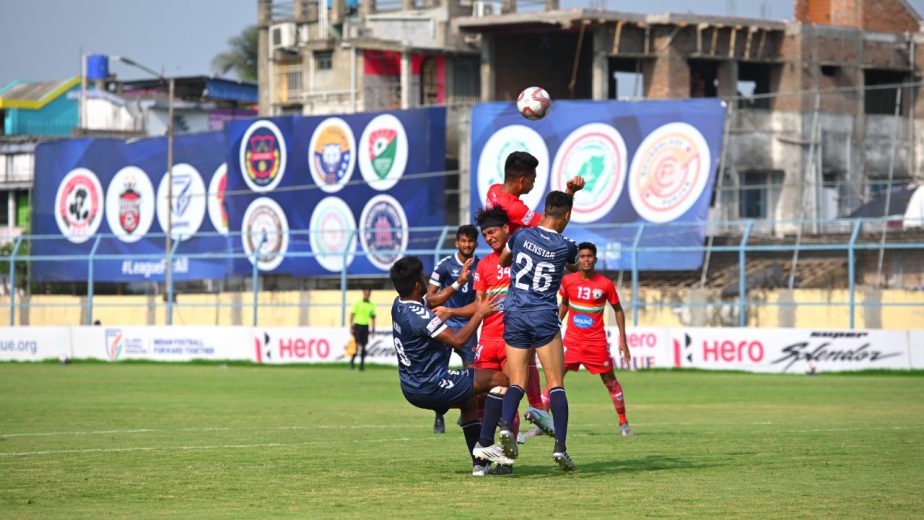 A narrow 1-0 victory for Sudeva Delhi FC lifted their spirits on the final matchday of Phase 1 against Kenkre FC, here at the Naihati Stadium. A deflected goal scored by Shubho Paul in the first half was enough to get three crucial points for Sudeva.

The match got off to a fiesty start as Kenkre midfielder Kiran Pandhare unintentionally put an arm in the face of Sudeva’s Nishchal Chandan, busting his nose open in the process. After the restart, Sudeva were the first to prowl forward with an attack that was put out for a corner by B. Nongkhlow.

In response to the early attack, Pandhare won the ball in midfield with a strong but clean challenge. The midfielder played a pass through to striker Ranjeet Pandre, who had to settle only for a corner. During this spell, Kenkre won three corners in a row but failed to convert any of them as Sudeva dealt with them well.

Kenkre were presented with another opportunity on a plate when Sudeva keeper Sachin Jha passed the ball straight to Kenkre midfielder Vijay Nagappan, who played a simple pass to Siddharth Colaco on the edge of the box. Colaco could have picked out a teammate but chose to shoot himself and blasted it into the stands behind the goal.

Nagappan popped up on the left flank in the final third again, this time crossing the ball in across the face of the goal. The cross was inch perfect but it was intercepted by Nishchal Chandan, who was at full stretch to take the ball away from Ranjeet Pandre, who was right behind him with an intention of simply tapping the ball in from three yards out.

Sudeva drew first blood as the ball fell to Shubho Paul inside the box and the youngster struck it firmly and saw it ripple the back of the net after picking up a slight deflection off Nongkhlow in the thirteenth minute.

Minutes later, Kenkre had an opportunity to draw level. A long ball went over the defence and fell to strikers Ranjeet Pandre and Akeraj Martins. There was a bit of confusion and the shot was brilliantly saved by Sachin Jha. Kenkre had to settle for a corner again and yet again they could not make the most of it.

At the other end, Kenkre keeper Padam Chettri was alert at his near post to deny Vanlalzuidika’s effort after the full-back darted down the right flank, cut back and unleashed a good strike towards the near post. Opportunities fell to both sides towards the end of the first half but the scoreline did not change at half time.

Minutes into the second half, a tussle broke out off the ball after Shubho Paul was taken down by Zacharie Mbenda and no foul was given. Kiran Pandhare and Sairuatkima were involved in the tussle and had their names taken by the referee. 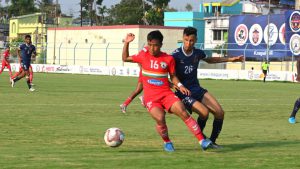 The incident changed the entire mood of the game. Kenkre’s substitute Aravindraj Rajan was booked for a reckless challenge on Zuidika. Abhijit Sarkar went down inside the Kenkre box and wanted a penalty but the challenge by Mbenda was clean. Sudeva’s substitute Sukhandeep Singh was also booked for a careless tackle on Ranjeet Pandre just 5 minutes after coming on.

Opportunities fell to Kenkre in the second half as they looked for an equaliser. Nagappan’s first touch let him down at the crucial moment. Pandhare’s decent header bounced off the crossbar and Pandre’s effort from close range was saved by Jha.

At one point, Jha was beaten as Pandhare played Nagappan in for a goal but the Sudeva defence stood tall to deny a goal. In the dying minutes of the game, substitute Pravitto Raju headed the ball into the net only to see the offside flag go up against him. Eventually, Sudeva managed to hold on to the narrow 1-0 lead and emerge victorious on the last matchday of Phase 1.

The victory lifts Sudeva to eleventh in the table, a point clear of Indian Arrows. Kenkre, on the other hand, have finished Phase 1 with no wins and two draws, keeping them at the bottom of the pile.