ARA aim to be organised against dominant Sethu FC After a thrilling 6-1 victory against Mata Rukmani, former Hero Indian Women’s League champions Sethu FC are all set to take on ARA FC on Wednesday, April 20, 2022 at the Kalinga Stadium in Bhubaneswar.

The Madurai-based side started well and were expected to continue with the same winning momentum. Head coach Crispin Chettri said, “ARA FC is a good side, but we want to go into the game with a positive mind-set and we want the momentum from the first game to continue,” when asked about the next game.

Crispin believes, “ARA is a young side with potential and they will improve with each game. They have an experienced coach who is tactically very sound. We have lots of areas to work on as a team and we expect to do better and bring out our best.” 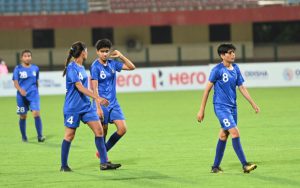 After the loss in the first match, ARA FC aim to be more organised at building their game from the back. Head coach Vivek Nagul said, “We would like to learn from our mistakes of the first match and will try to be more compact in defence.”  Quizzed about the opponents Nagul said, “The opponents are a good team and we respect them but are not scared at all. We will go with a spirited attitude.”