Kenkre head coach Akhil Kothari made 4 changes to the team which had lost to Indian Arrows last time. Kenstar, Al Azhar, Akeraj, and Vijay found themselves in the starting lineup today for this afternoon match against Sudeva Delhi.

Kenkre started the game well and went on in attack from the very first whistle. They created a few chances in the first 10 minutes but couldn’t capitalize on them.

In the 13th minute, Sudeva Delhi opened the scoring with a goal from Shubho Paul. The forward took a shot inside the box and found the back of the net to give his side the lead.

After going down, Kenkre showed some good attacking intent and in the 18th minute, Akeraj came close to equalizing but his effort on goal got saved by Sudeva’s goalkeeper.

In the 23rd minute, Kenkre goalkeeper Padam Chettri was called into action as he made a brilliant save and denied the opposition from doubling the lead.

In the 33rd minute, Sudeva’s Lotjem went past our defense, Kenkre goalkeeper Padam came out of his box and got beaten and Lotjem took a shot at the open net but a calm and composed Al Azhar made the run to the box and cleared the ball.

Although Kenkre had a better first half than the opponents, they could not manage to level the scoring. The half ended with a scoreline of 1-0 in Sudeva’s favor. 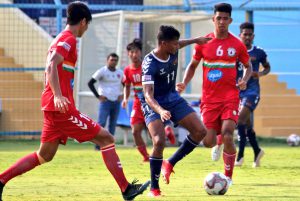 Kenkre continued the same attacking intent from the first half to the second. In the 52nd minute, Kenkre forward Ranjeet came close to scoring. He took a lofty shot from the left flank and the ball went towards the top right corner but an attentive Sudeva keeper stretched himself to collect the ball.

In the 63rd minute, Kenkre’s Nam put a good cross into the box. Kiran headed it towards goal but his effort skinned off the crossbar and went behind.

In the 90+2nd minute, a long throw from Pravitto into the box was flicked on by Yash. Akeraj headed the ball but it was collected by Sudeva’s goalkeeper. In the 90+5th minute, Akeraj lobbed a ball inside the box to Ranjeet, who headed the ball into the back of the net but the linesman raised his flag for a fractional offside.

Kenkre created a decent number of chances throughout the second half and dominated the entire game but were unlucky to find the back of the net as the game ended with another loss for them.

Further, the boys will start preparing for Phase II which will kick off on 22nd April 2022.

Sudeva Delhi pip Kenkre to finish Phase 1 with a win
Carlos Pena: It’s the perfect time for me to return