Ruthless Mumbai City FC rout Chennaiyin FC 6-2, after being 2 down 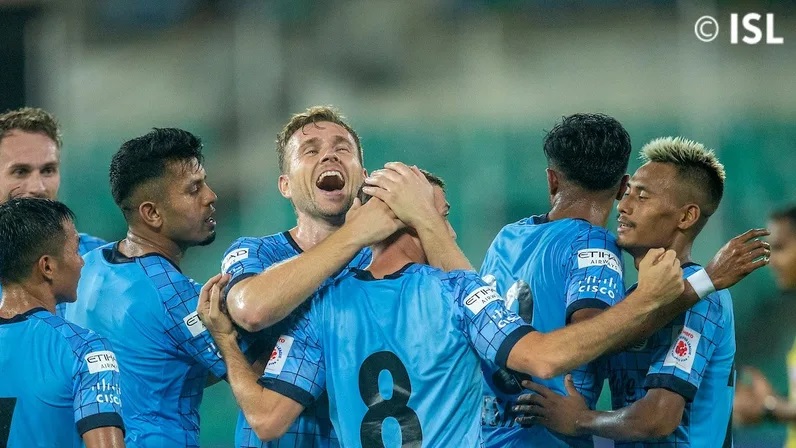 It rained goals at the Jawaharlal Nehru Stadium in Chennai as Mumbai City FC came from behind to beat Chennaiyin FC 6-2 in the Hero Indian Super League (ISL).

Mumbai City FC found six different goalscorers, three of them coming off the bench, after falling 2-0 behind just past the half-an-hour mark.

The Marina Arena erupted in the 19th minute when Petar Sliskovic put the hosts in front. Sangwan’s delivery from the corner came off Rahul Bheke before reaching Rahim Ali. The striker lobbed the ball across the face of goal and Sliskovic headed it in from close range as the Islanders conceded the first goal of the match for the first time this season.

In the 32nd minute, the Marina Machans doubled their lead. Sliskovic ran at Mehtab Singh before rolling it towards El Khayati. The Dutchman’s first shot was blocked by Mehtab, but the rebound was slotted in perfectly at the near post.

In the next minute Mumbai’s deficit was down to one. The Islanders swarmed forward as Stewart whipped the ball in from the right flank. Diaz beat his marker and headed the ball past Debjit Majumder to make it 2-1.

In first-half stoppage time, Lalengmawia Ralte beat Debjit to the ball and was taken out in the process. The referee pointed to the spot and booked the keeper. Stewart stepped up to take it and sent Debjit the wrong way to reinstate parity in the fourth minute of stoppage time.

At half-time, Des Buckingham made two changes with Vinit Rai and Vignesh Dakshinamurthy coming on for Ralte and Dessai. The game turned on its head four minutes into the second half. Bipin pulled the ball back towards the edge of the box and Rai smashed it in with his first attempt at goal.

The visitors struck again at the hour-mark and established a two-goal cushion. Ahmed Jahouh’s corner was cleared only as far as Dakshinamurthy at the edge of the box. The defender put his boot through it and found the back of the net.

The Islanders’ third substitution of the evening, Alberto Noguera, also got on the scoresheet in the 65th minute. The Spaniard received the ball from Bipin and a powerful shot picked up a deflection off Diagne to sneak in at the far post. Bipin was in the action again at the very end, skipping past the defence and tucked the ball into the net to become Mumbai City FC’s leading goalscorer with 16 goals.

The win lifts Mumbai City FC up into second place in the league, four points behind leaders Hyderabad FC. The Islanders’ next challenge will be facing Bengaluru FC at home on  November 17, Thursday. Chennaiyin FC stay sixth on the table, just a point ahead of Kerala Blasters. They will stay at the Marina Arena for their next game against Jamshedpur FC on November 19, Saturday.

Alvaro Vazquez: I want nothing but the three points in Kerala
Kaun hai Bombay ka best? Well that’s the question FootballGeek is asking to all the football teams in Mumbai.