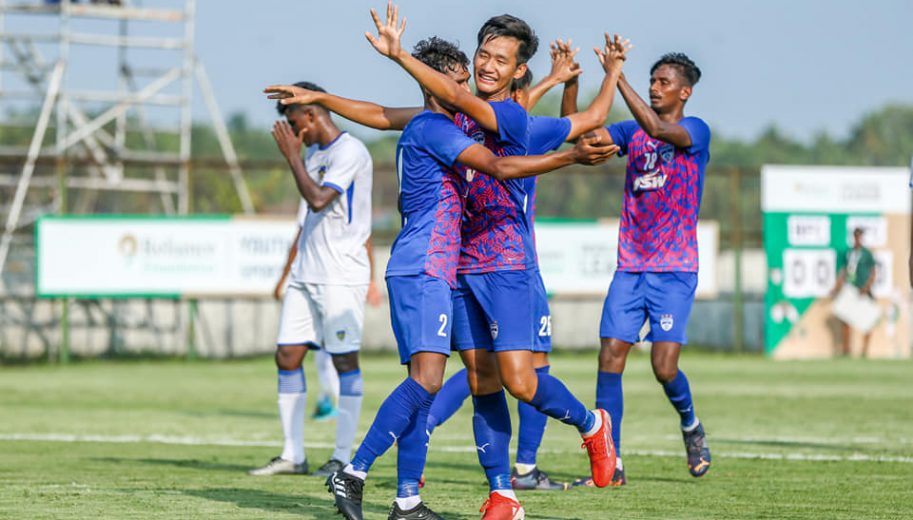 Reliance Foundation Young Champs (RFYC) produced an all-round display to fashion a 1-0 victory over Jamshedpur FC and extend their unbeaten run to three games, in a round-five Reliance Foundation Development League (RFDL) clash at the Nagoa Ground on Tuesday.

Meanwhile, Bengaluru FC assured themselves a top-two finish with a clinical 3-0 win over Chennaiyin FC to extend their perfect run to five games, in a lopsided encounter at the Benaulim Ground.

Rashid CK curled a wonderful free kick in the 16th minute to give RF Young Champs the lead as Jamshedpur’s Sorokhaibam Meitei dragged a penalty wide of the target just after the restart. Nikhil Barla found the crossbar in the 38th minute for the Red Miners before the brilliant Chirag Bhujel saw his effort cannon off the post in the 68th.

RF Young Champs took an early lead after both teams looked to make inroads in the opening exchanges. Bhujel was fouled on the edge of the box after a jinking run, Rashid converting the free kick with aplomb as he curled a low drive into the bottom left corner leaving the keeper with no chance.

At the back, RF Young Champs’ defender Salman Faris was a rock as he made an important clearance close to the goalline from Lalruatmawia before Barla’s attempt came off the woodwork and substitute Meitei skewed the rebound wide. Meitei got a golden opportunity to make amends at the start of the second half from the spot after Lalruatmawia was tripped inside the box. But the midfielder dragged his effort wide after sending the keeper the wrong way. Jamshedpur pushed for an equaliser but RF Young Champs held firm as both teams missed chances towards the end.

Coming to Bengaluru, the Blues have 15 points from five matches and cannot drop to third in the eight-team table under any circumstance. The top two teams from the RFDL will compete at the Next Gen Cup to be hosted in the United Kingdom for the first time later this year. The Next Gen Cup will be hosted by the Premier League (PL) as part of its longstanding partnership with the Hero Indian Super League to support the development of football in the country.

Naushad Moosa’s charges rode a brace from Lastborn Mawphniang (25th, 69th) either side of halftime with Bekey Oram also finding the back of the net in the 68th minute. It was all Bengaluru from start to finish, Amay Morajkar’s shot from distance finding Bekey, who was fouled inside the box but the referee played advantage as the ball fell kindly for Lastborn, who slotted home from close.

In the second half, RF Young Champs product Huidrom Thoi Singh made an immediate impact after coming on in the 66th minute. Rahul Raju’s effort was parried away by Chennaiyin goalkeeper Devansh Dabas but only as far as Thoi who cashed in on the rebound to cut back for Bekey who scored with a deft back-heel. Lastborn completed the trounce one minute after, smashing home a Bekey pass. Chennaiyin remained winless from five matches, languishing in seventh place with just two points. Bengaluru are top of the table.