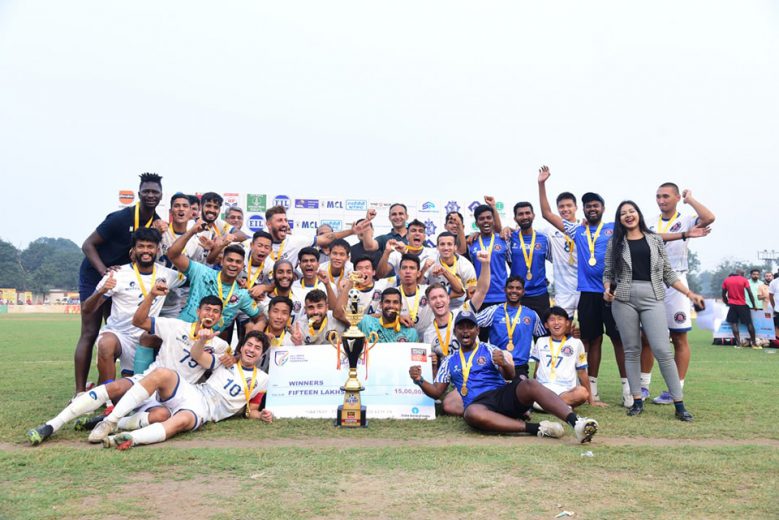 Talcher, November 8: Rajasthan United beat Churchill Brothers 4-2 (2-2 after full time) in a shootout to win the inaugural Baji Rout Cup 2022. Md Rafique’s heroics in goal during that shootout helped the warriors get their first trophy of the season.

Rajasthan United kicked the game off at a frenetic pace and within the first 10 minutes were two goals to the good. The first came in the seventh minute. Shaiborlang Kharpan pounced on some lax defending, setting himself up with a perfect first touch before slotting the ball into the bottom corner to give RUFC the lead.

If the first goal was top quality, the second got the stadium to its feet. After some neat interplay at the top of the box, Joseba Beitia’s layoff found Ragav Gupta Athi on top of the box. The midfielder hit the rolling ball first time with his left foot straight into the top corner, doubling the Desert Warriors’ lead.

Playing catch-up, Churchill struggled to put anything together in that opening burst, and on occasion, they got some momentum RUFC’s defense were up to the task. In first-half injury time, Churchill’s Iranian striker Milad Pakparwar halved the deficit wi a goal of his own. RUFC went into the break with a 2-1 lead.

In a high-pressure second half, Churchill were the ones who were on the ascendancy. In the 83rd minute, Milad’s cross was met perfectly by Mapuia’s who headed it home to draw them level. A penalty shootout loomed.

In the shootout, RUFC stayed perfect, each of their takers bulging the net. On Churchill’s crucial penalty, Milad’s panenka was smartly saved by Md Rafique leaving Martin Chaves with the duty of getting them home. He did so duly as RUFC kicked off their season with a trophy.