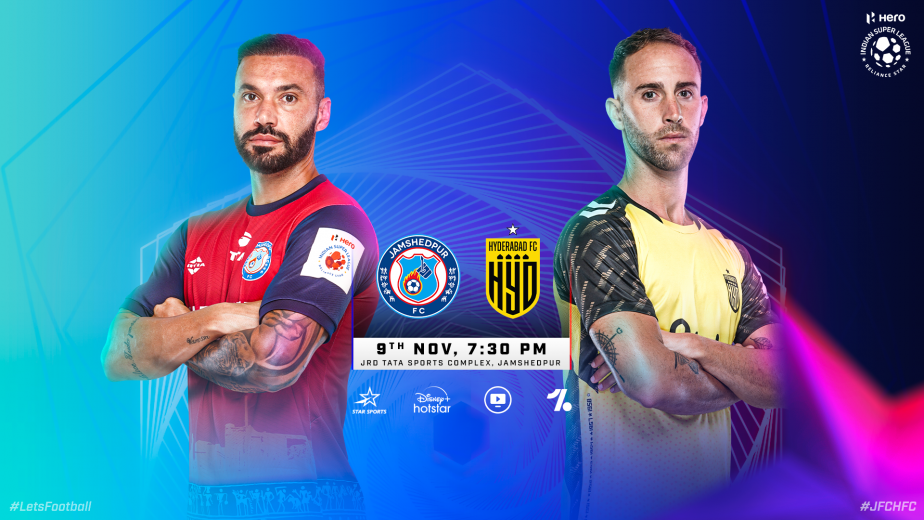 The stage is set at the Furnace as defending champions Hyderabad FC go toe-to-toe with last year’s league winners Jamshedpur FC in the Hero Indian Super League (ISL) at the JRD Tata Sports Complex in Jamshedpur on Wednesday.

On the one hand, Hyderabad FC are unbeaten this season; and the other, is Jamshedpur FC who have a 100% face-off record against the visitors.

The hosts have lost just eight games out of 28 at the Furnace. Additionally, the Red Miners are used to striking early, as all their goals this season have come in the first half; however, the overall scoring has been lacking and they have exactly four goals from four games at the moment as they sit in ninth place.

Defender Eli Sabia is injured and Pratik Chaudhari is expected to take his place alongside Peter Hartley in defence. Jamshedpur FC will be relying on Boris Singh and Ritwik Das to find their strikers from the flanks. The midfield battle between Wellington Priori and Joao Victor will be one to keep an eye on.

“They [HFC] have been together as a team for three years. That gives them stability,” said Boothroyd. “For us, I was very disappointed with the performance against FC Goa. The second half was better but still not what we expect or what we demand from each other. And what better place to put that right than playing against the current leaders of the division? They are a good team with a good coach. We are all excited and looking forward to it,” he added.

Hyderabad FC are unbeaten in five games so far. The defending champions have won four and drawn one game this season. Additionally, they have also kept four consecutive clean sheets. A shutout against Jamshedpur will see them equal FC Goa’s (2018-19) and Mumbai City FC’s (2014) record of five successive clean sheets.

Bartholomew Ogbeche was benched in their last game to give Borja Herrera a start. If Javier Siverio starts up front, Marquez will have three options for the number ten role – Herrera, Ogbeche or Joel Chianese. Halicharan Narzary and Mohammad Yasir have cemented their places in the starting eleven after a series of consistent performances. In defence, Nikhil Poojary was named Hero of the Match in the last game as defensive duo Chinglensana Singh and Odei Onaindia were rock solid in defence.

“They are the Shield winners and we are the defending champions. But every season is different. One big difference for us is continuity. Jamshedpur have retained most of the squad, but it is not easy when you change the coach,” said Marquez. “Owen Coyle had a very clear style. Jamshedpur play really well; sometimes, they cannot, like against Goa. These things happen when playing under a new coach. Despite that, it will be a tough game and let’s see what happens tomorrow,” he added.

The two sides have met each other six times in the Hero ISL. Four games have ended in draws, and the Red Miners have won two. Hyderabad FC will essentially have to break Jamshedpur FC’s unbeaten streak against them to extend their current streak.