Pune, Thane, Nashik & Buldhana advance to the next round Of WIFA Interdistrict U-17 Girls Tournament 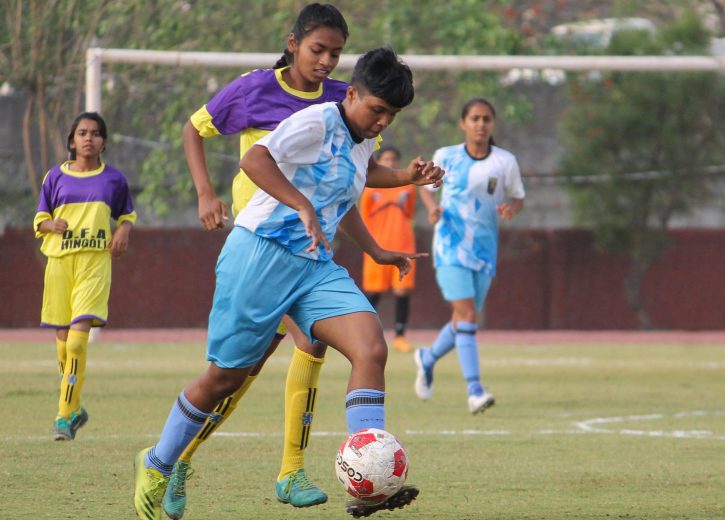 Goals galore on Day-3 of the WIFA Interdistrict U-17 Girls Tournament as Pune, Thane, Nashik, and Buldhana with convincing victories confirm their places in the next round

Pune kicked off Day-3 of the ongoing WIFA Interdistrict U-17 with a win over Hingoli. Pooja Gupta opened the scoring in just 2 minutes to the game. 2 minutes later Piyusha doubled her side’s lead. The third goal for Pune came off from Tanaya Gaikwad in the 5th minute of the game. Pooja scored 2 successive goals in the 11th & 20th minutes to complete her hat-trick. Tanaya found the back of the net again in the 22nd minute to complete her brace. For Pune, Roshni Pandit scored the seventh goal in the 23rd minute. Sanjana Gupta confirmed her team’s victory in the 25th minute with the eighth goal of the game.

Thane registered a solid 5-0 win over Solapur. Akshara Mishra scored the opener in the 20th minute of the game. Two minutes later, Veena Devi doubled her side’s lead. At halftime, Thane had a 2-0 lead.

In the second half, Lavanya Khatwani scored the game’s third goal in the 38th minute. Angelina scored the fourth goal in the 46th minute. Gavri found the back of the net three minutes later and sealed the victory for her side.

Nashik dominated the proceedings from the very first whistle and Ritika scored the first goal for her side in just 2nd minute of the game. 10 minutes later, Manish doubled Nashik’s lead. Aditi found the back of the net in the 15th minute. Ritika scored her second goal in the 17th minute. Grishma scored the fifth goal for her side in the 18th minute. Aditi completed her brace in the 23rd minute. Nashik entered the tunnel at the end of the first half with a 6-0 lead.

Nashik continued their onslaught in the 2nd half as well as Ritika completed her hat-trick in the 28th minute. Ritika scored once again in the 32nd minute. Manisha scored her second goal of the game in the 35th minute. Ritika scored 2 goals in the 40th & 49th minutes and completed her double hat-trick. The one-sided game came to an end as Nashik registered a huge victory.

Janvi opened the scoring in the 2nd minute of the game to give Buldhana the lead. Sakshi doubled Buldhana’s lead in the 19th minute. Sakshi scored another goal in the 25th minute. The first half ended with a 3-0 lead in favor of Buldhana.

Lakshika found the back of the net in the 35th minute of the game. Prarthana scored her side’s fifth goal in the 40th minute. Rashmi Sonar scored the final goal of the game in the 49th minute as the game ended as a victory for Buldhana.