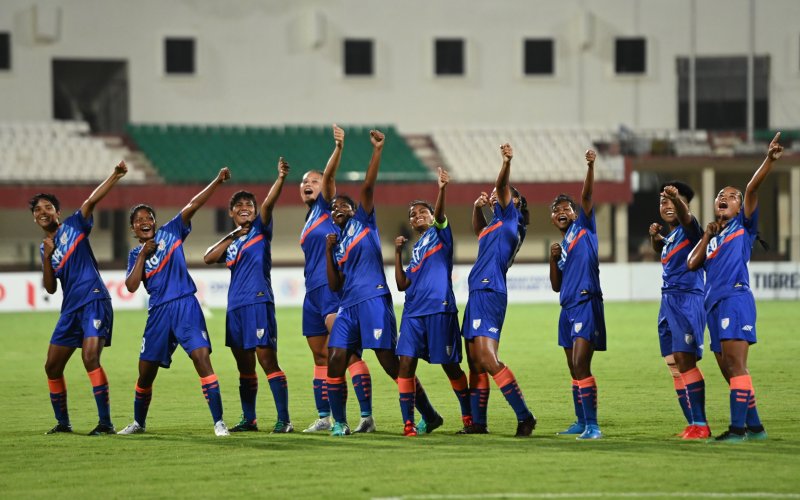 Indian Arrows ran riot in the Hero Indian Women’s League on Friday, May 13, 2022, as they registered a massive 8-0 victory against Mata Rukmani FC at the Kalinga Stadium in Bhubaneswar.

Midfielder Priyangka Naorem netted four goal on the night, while forwards Apurna Narzary and Sunita Munda netted a brace each, to complete the drubbing.

Arrows made a quick start to the game with Apurna Narzary opening the scoring in the 11th minute.

Thereafter Priyangka Devi earned a brace for herself to increase the lead for Arrows with two consecutive goals in the 25th and 42nd minutes. Going into the lemon break, it remained 3-0 in favour of the Arrows.

The goal shower started after the breather, as Arrows completely dominated the game. Sunita found the net within five minutes in the second half, to make it 4-0 for her side. Next Priyangka found the net to complete her hat-trick within the 49th minute.

The Arrows created waves of attack, making it difficult for Mata Rukmani to put up much resistance.

Just after the hour mark, the flood gates opened completely. In the 61st minute, Priyangka scored her fourth of the night, followed by Sunita, who scored the 7th goal of the night in the 62nd minute.

Apurna completed the rout for the Arrows, scoring the last goal in the 66th minute, as they ended the game with two goals to her name.

After this win the India Arrows remain fourth on the league table with 16 points from eight games.

Also Read: Yavatmal, Satara, and Palghar confirm their places in the next round of the WIFA Interdistrict U-17 Girls Tournament

Yavatmal, Satara, and Palghar confirm their places in the next round of the WIFA Interdistrict U-17 Girls Tournament
Western Railway holds Mumbai Customs to a goalless draw