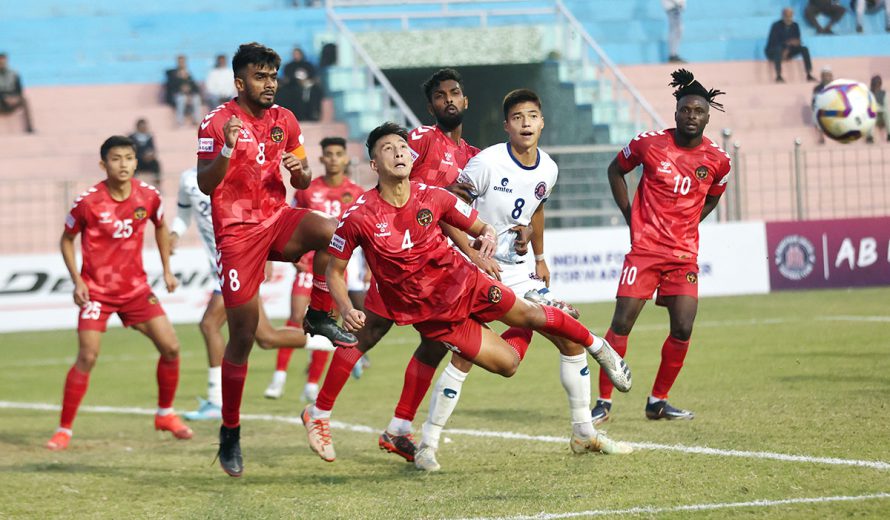 Hosts Rajasthan United were held to  a 1-1 draw by Mumbai Kenkre in the sixth-round tie of the Hero I-League 2022-23 at the Dr. Ambedkar Stadium in New Delhi on Wednesday (November 7, 2022).

In a game that livened up only in the second half, it was Mumbai Kenkre’s Aman Gaikwad who put his team in the lead before it was canceled out by Rajasthan United’s Kyrgyz midfielder Bektur Amangeldiev.

The match began at a slow pace with both teams trying hard to find the rhythm. Rajasthan United controlled the proceedings as they tried to build the attack from the back, while Kenkre relied on a long ball strategy. The hosts received a few set-pieces in the opening minutes. However, they couldn’t create any chances.

Midway through the half, the game started to open up and it was Rajasthan United, who saw more of the attacks. In the 25th minute, Bektur Amangeldiev lobbed the ball for Shaiborlang Kharpan, who made an intelligent run behind the Kenkre defence, but shot wide. Two minutes later, Rajasthan Captain Martin Chaves went the closest to breaking the deadlock. A cross from Hardik Bhatt was headed well by Chaves, but his effort was inches away from the target.

In the attacking third, skipper Chaves and Joseba Beitia were all over the pitch for the Desert Warriors. The midfield duo created several chances for their attackers. That no goal the home side could score during this period was mainly because of Kenkre defender  B Nongkhlaw, who did a good job for his side.

The second half began with the visitors taking the lead within seven minutes. The Rajasthan defence was caught napping as Aravindraj Rajan whipped a cross into the six-yard box with Aman Gaikwad meeting it correctly to find the net. A minute later, the hosts almost equalised, when Chaves received the ball on the edge of the penalty area and chipped it for Kharpan, who had just the goalkeeper to beat. As Kharpan delayed in taking the shot, Kenkre goalkeeper Tenzin Samdup charged out to deny Rajasthan a certain goal.

The Desert Warriors equalised in the 74th minute. A curling cross from William P found Amangeldiev inside the box and the Kyrgyz midfielder finished calmly to put his team on level. A minute later, substitute Pintu Mahata entered the penalty area and he put a cross for Amangeldiev in the six-yard box. This time Amangeldiev came close to scoring his second goal of the day before Samdup made a good save.

After this match, Rajasthan United are third on the points table with 11 points. Mumbai Kenkre are placed 8th, collecting six points from as many matches.