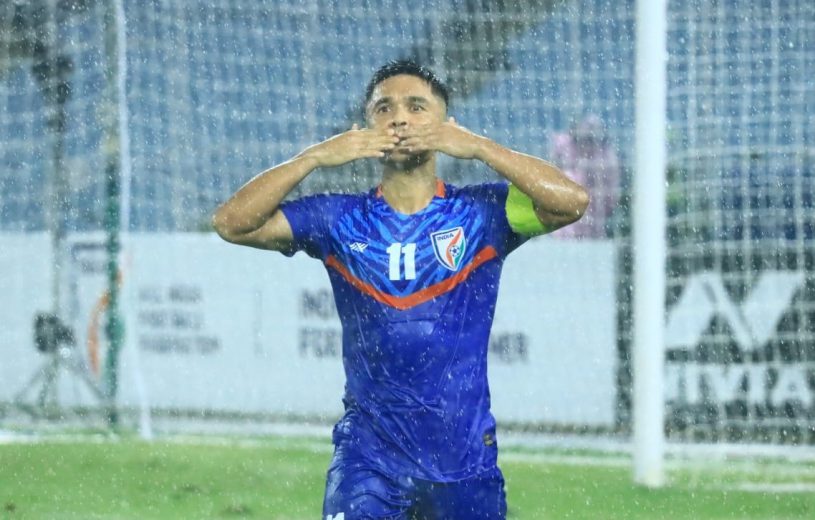 When the team needed him, he responded. At age 37, the only question that the young man with astute scoring abilities faces is, where does he see himself in the next five years? Maybe, still scoring screamers for the Indian football team. Who knows?

Sunil Chhetri is ranked third in the list of all-time active goal-scorers today. Lionel Messi (2) and Cristiano Ronaldo (1) are ahead of him. During India’s final game against Hong Kong, Sunil matched another record. Roshan’s set-piece met Sunil’s feet during the concluding minutes of the first half, and the following action saw India’s captain cushion the ball into the net.

The VYBK Stadium erupted in unison witnessing the moment. This time, his 84th international goal equaled the scoring tally of legendary footballer Ferenc Puskas, a former Real Madrid star and an all-time great from Hungary.

Puskas, like Sunil, was a short man with immense abilities. His scoring record included a staggering number of 514 domestic goals and 84 international goals.

Ferenc was a glorious name in world football who played for Real Madrid. One of his many records includes scoring his last goal at age 38, for Madrid, making him the oldest player to find the net for them. He held the record for decades until Karim Benzema recently broke it in the Champions League last season.

Similarly, Sunil, who is 37 now, is making and breaking records every day. Since the Indian Super League (ISL) started, Chhetri has scored 51 goals, ranking him second on the top scorers’ list behind Bartholomew Ogbeche.

Despite mega achievements, Sunil maintains his smile and surprises all with humility and hunger for more. His passion for the game, mentorship, and charming personality add to it. And not to forget his heart-touching stories on Social Media. We never go out of reasons to love our captain.

In a recent interview with the AIFF, Sunil spoke about his journey so far. He shared his experience of representing the national team for 17 years and playing domestic football for two decades with some anecdotes:

From a backbencher to leading the team from the front. What has changed?

When I started, I used to be the backbencher. During those days, Bhaichung da and Renedy da led the team. But now, I don’t remember the number of years it has been since I sat in front, leading my fellow team members. With age comes greater responsibilities. For myself and the team. I had to become a leader. I won’t lie, it might get lonely at times, but I’m not complaining. I sometimes reminisce about my younger days and smile. It is life.

Some of the current Indian team players were not even born when you made your international and domestic debut. What are your thoughts?

Don’t tell them this! (laughs) Yes, of course, when I started my domestic career in the famed Boro Match (the East Bengal vs Mohun Bagan derby) some of the boys were not born or were very young. We have a good laugh about it whenever we speak. But looking back, I feel honoured and privileged to have received this opportunity. It is not very common to be a part of a football team, more so of a national team. There are not many players who have played or had the honour to represent the national team for so long. I feel proud. I try to give my best because that is the least I can do. I am living a dream, and it has been outstanding so far.

What is your take on the achievements, like winning the Padma Shri and Arjuna Awards?

Thank you so much for mentioning these awards. I feel proud to have achieved them. However, as I say, these achievements did not happen only because of my efforts. It is the efforts of many people surrounding me. I feel, alongside these accolades, the most important achievement is our qualification for the Asian Cup. I remember the matches we played against Thailand, Bahrain, and UAE in the 2019 Asian Cup. That is the platform we want to be a part of. It is very special and important for the Indian football team.

Team India qualified for the Asian Cup being the toppers of Group D. They won all three matches against Afghanistan, Cambodia, and Hong Kong held at the VYBK Stadium, Kolkata. India’s qualification means that the team will take part in AFC Asian Cup next year, comprising 24 best Asian teams.