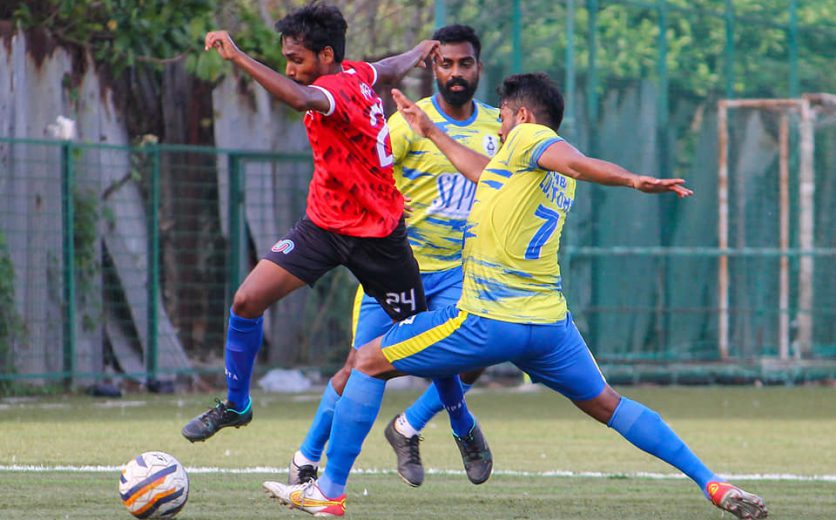 Mumbai Customs put on an attacking shift in a brilliant performance as they comprehensively outclassed UBI in a 4-1 win.

Customs came out with intent early on, looking to control the game right from the start. In the 8th minute, a cross from Praneel was well controlled by Marc D’souza before the striker shot past the keeper’s near post to make it 1-0.

As the game moved on Shrikant Veeramallu had a great chance to double the lead but his final shot was disappointing going straight to the keeper. At the end of the first half, Shubham Mane took on his marker before his final shot was blocked, the rebound fell for Dhawal Waghela whose strike on the volley went into the net to make it 2-0.

Minutes before the halftime break, Leander Dharmai sent in a dangerous cross inside the UBI box that was met by a stunning diving header of Shrikant Veeramallu as Customs headed into the break with a comfortable 3-0 lead.

The second half began with Customs continuing to put pressure on UBI defense. A cross from Ajinkya across the UBI box was missed by Marc as the score remained 3-0.

In the 66th minute, UBI were given a lifeline when Athang Kanekar cut inside near the box before unleashing a powerful shot that beat the keeper to make it 3-1.

However, any comeback was quashed away as an error from the UBI defender was capitalized by Marc who set up Praneel inside the box as the latter finished it off to make it 4-1 and put the game to bed.