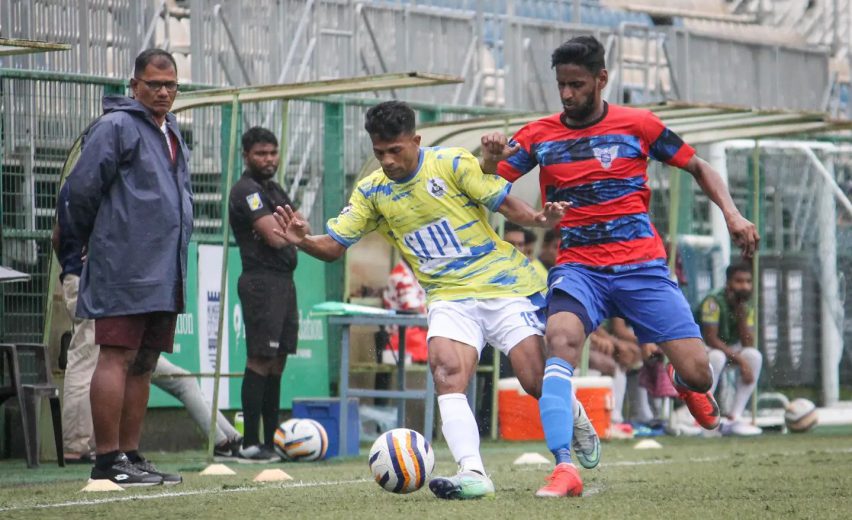 In an entertaining end-to-end game of football, Mumbai Customs faced off against KSA in Match 10 of the MFA Harwood Champions League. Both sides were in search of their first win of the campaign with just a point to their name in three games.

The first chance of the game came for KSA’s Sanchit Singh when he brilliantly chested down a cross from the left flank before taking a swipe at the goal that brought a save from Custom’s goalkeeper Pradeep Kumar.

At the other end, Customs went close after Pragnesh Solanki took advantage of Noel’s error to find Praneel in space. However, the latter’s shot went wide of the target. Customs finally broke the deadlock near the end of the first half when Pragnesh crossed the ball from the right flank into the KSA Box. The goalkeeper came off his line to punch the ball away from danger but the ball only went as far as Marc Dsouza just outside the box, who took a touch before striking it past the KSA defense to make it 1-0.

In the first half’s added minutes, KSA missed a chance to make a quick comeback when Zaid’s cross into the box was wasted after an unmarked Abuzar Beg missed the header.

In the second half, a moment of individual brilliance from Asadul Khan saw him take on Hikmat and Gaston. Dribbling past the veteran defenders, Asadul then played a beautiful left-footed shot as the ball curled into the net to make it 1-1.

Customs looked to take control of the game but KSA was alert to hit them on counters. On one such counter, KSA won a corner, the resulting corner-kick saw Johnson play a quick short corner routine with Sanchit before sending the ball into the box where Mohd. Zaid beat his marker to head the ball into the net.

This was followed by a frantic final ten minutes, Soibam went close to doubling the lead for KSA when his shot came off the bar while Johnson’s freekick was saved by the Customs keeper.

Just when the game seemed to head towards a KSA win, Customs Hekmat Singh made the run forward expertly chesting a cross down before striking it past the KSA keeper to make it 2-2.

With this draw, the wait for the first win continues for both sides.