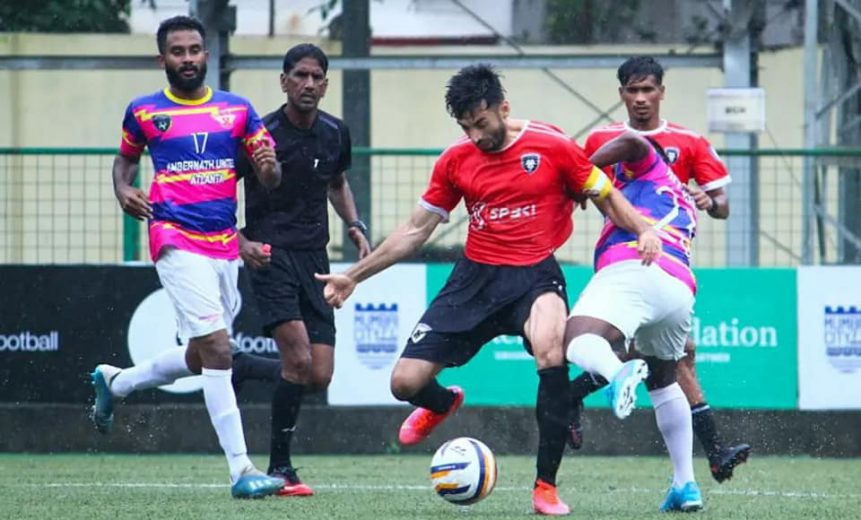 Since the start of the football season, Ambernath Utd-Atlanta FC has played a total of 20 games in Mumbai Football, winning every single one of them.

PIFA came into the game having not conceded a single goal in the two games played in the competition. However, they had a poor start to the game when a late challenge by Calvin brought down Rohit inside the box with the referee having no hesitation in pointing to the spot-kick. Himanshu Patil slotted it past the keeper to break the deadlock while taking his tally to 5 goals in the competition.

At the other end, failing to breach a resolute defense, PIFA were left to take attempts from a distance that rarely troubled the AUA FC keeper.

With well-kept possession, AUA FC were moving the ball with ease and confidence. Aaron played the ball to Shravan he dribbled past the defender but he was fouled outside the box Nitesh’s free-kick over the PIFA defense found an unmarked Alan Dias who headed into the net to make it 2-0.

PIFA had a couple of their own chances but lacked execution in the final third. Rohit Mirza first beat his marker to send in a dangerous low cross across the AUA FC box only for no one to tap it on. A few minutes later, another shot from Rohit Mirza on goal came off the Defender as the score remained 2-0.

Around the half-hour mark, Shravan Shetty in the attack took a powerful strike that was deflected onto the bar. The resulting corner saw Aaron play it to Nitesh who set up Alok Singh whose shot beat the keeper and went into the net to make it 3-0.

PIFA looked to mount a comeback in the second half, it began with Shamer’s shot bringing out a save from AUA FCC Goalkeeper, before around the hour mark, Calvin Barreto latched on to a ball played by Rohit Mirza took a brilliant shot that beat the AUAFC keeper to Nestle into the net.

Thereafter Ambernath managed to restore their balance defending vociferously while creating few chances of their own. Himanshu and Ritesh were quite wasteful in final minutes of the game as the score ended 3-1

Opportunity for me to be a good ambassador for Indian women’s football: Dangmei Grace
Hekmat’s injury-time goal rescues a point for Customs