This year marked India’s maiden participation in the AFC Champions League as ISL League Winners FC Goa were pitted in Group E alongside Asian heavyweights Persepolis, Al Rayyan and Al Wahda. All the 12 matches of Group E were conducted in Fatorda Stadium, Goa.

Against Goa were the Asian giants, Persepolis from Iran, who were the runners-up in the previous edition alongside 4 time UAE league champions Al Wahda and the 8 times Qatar stars league winners Al Rayyan. But just as Persepolis‘s head coach Yahya Golmohammadi said, “FC Goa are here on merit, not by accident”, Goa gave a tough fight to everyone and showed that they belong here!

The Gaurs finished third in their group behind Persepolis and Al Wahda with three points in six games. The three points came from 3 draws, two against Al-Rayyan and one against Al Wahda. However, they scored their first goal against the best team in the group, Persepolis. It was none other than Captain Edu Bedia on his duty, who scored a perfect header from a Brandon Fernandes cross.

In their second encounter against Al-Rayyan, Goa almost registered the first win for themselves, but a late 89th-minute goal from Ali Ferydoon stopped them from clinching the first-ever win in the Champions League. On this, head coach Juan Ferrando said, “I  wanted to win for the people of India. It is difficult when you lose in the last minute. But, the truth is that we are playing against very good teams. It is a pleasure to play against Persepolis, Al Wahda and Al Rayyan.” 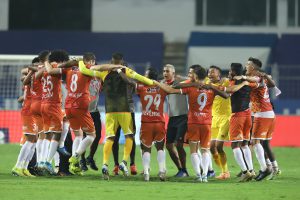 Juan Ferrando’s men deserve praise for their intensity and mentality throughout the tournament and for not giving up against such big teams. On the other side, there were some concerns in the attack for FC Goa. They averaged just 5.2 shots per game and 2.3 shots on target per game; these are amongst the least by any team in the ACL this season.

The one who stole the limelight was goalkeeper Dheeraj Singh. A dream start for the 20-year-old goalkeeper to his career, where he had the best save percentage who has played a minimum of three games in AFC Champions League (86.2%). Also, he faced the most shots on target this season (29) in his five appearances and kept Goa’s hopes alive till the very last minute of every game, also because of his impressive performances he was a part of the AFC team of the week.

This tournament will surely help FC Goa to learn and develop more. Fixtures of such high intensity and tough opponents teach you many lessons. We hope FC Goa can make their way back to AFC Champions League in the coming years!