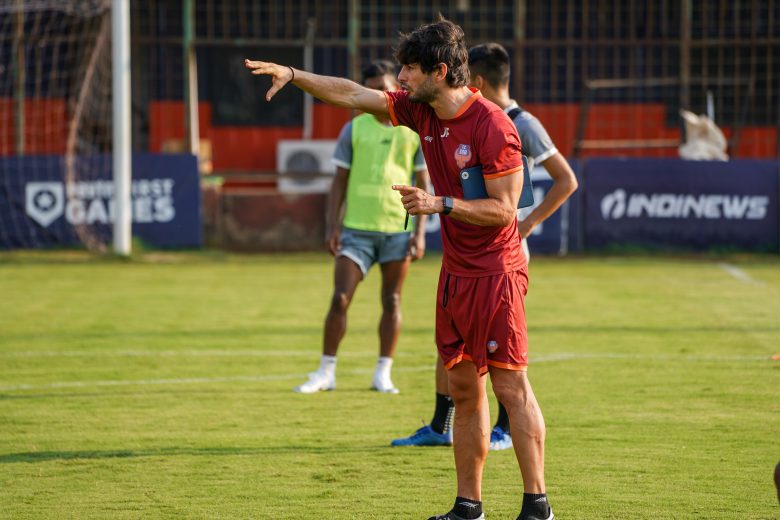 FC Goa’s AFC Champions League campaign ended last month without a win. The Gaurs, though, won hearts all across India. Their dogged displays under the lights at Fatorda came mixed with heavy dollops of the brilliant passing football – characterized by swift passing and movement whenever the opportunity presented itself.

The philosophy remained unfettered as they rose up to the challenge in Asia’s biggest club competition. It was heartening for all the fans of Indian football as well, who can hold their heads high as the Gaurs rubbed shoulders against the biggest names in Asia and held their own.

After delivering a playoff appearance in his very first season in the Indian Super League and masterminding an AFC Champions League campaign that we all will remember for a long time to come, Juan Ferrando spoke in an exclusive interview with fcgoa.in looking back at his first season in India.

1. Looking back at the Champions League campaign, what are your thoughts about the performance of the team?

JF: I think players have performed on a high level and have done great as a team. However, this experience has shown us we need to improve many tactical aspects on the pitch so we can be more competitive at an international level.

2. We came quite close to a win a few times over the course of the tournament. How disappointed are you that we didn’t get a win?

JF: Obviously, I am disappointed as our mentality is to win every match we go into and try to get the best result possible. From a psychological point of view, it was tough to accept that we could not get a win. However, in the end, this shows us that in football one needs to be self-demanding and keep improving to be able to celebrate in the future.

3. How important do you feel the win would have been – both for the club and Indian football?

4. You said at the beginning of the tournament that we have to be competitive while learning. Can’t lose 6-0 and say we learnt a lot. We lost only one game by a big margin. How happy are you with this fact?

JF: Obviously, I am not happy with any big margin loss as this means there were mistakes, be it individual or collective. However, the point is to spot these mistakes and go back to the pitch to work on them, to do one’s best and try to win every time.

5. What was your biggest challenge during the tournament?

JF: My biggest challenge was to prepare the team for all matches the best way possible, as there was just one day for training between matches. To play 6 high-level matches in just 20 days is challenging itself as there is no time for players to recover properly and for the coach to train them tactically to play the next rival.

6. How much will this experience make an impact on the performance of the players in the coming days, according to you?

JF: I hope they have learned about what playing an international competition means, the effort it requires to play at such a high level. I hope this gives them the motivation to perform even better in the training sessions in the future as these games require one to be at one’s 100% – physically and psychologically.

7. In which aspect do you think the team improved the most during the AFC Champions League?

JF: Focus. During the matches. I think it was very important to be focused at all times during the match – in every single action. This was a great lesson for us to play as a team for 90 minutes.

8. To everyone’s disappointment, you had to leave early. How keenly were you looking at that last game to script a win and how disappointed are you that you were not able to?

JF: I understand the situation we are in. It was the first time in my coaching career that I was watching a match so many kilometres away, unable to be with my team at such an important moment. Of course, we were hoping for a win and I was pretty nervous because I wasn’t able to communicate with players on the field.

9. Have you ever worked with a team this closely (since you were in a bio-bubble) for this long period of time? What were the challenges and how did you overcome them?

JF: I have been working in many countries and in many clubs, but never in such a situation. However, COVID has changed everything. I believe the most challenging part of it was related to psychology.

Being everyone far from family, friends, and without the option to have some mental rest outside the bio bubble was something we were not used to and made it more difficult for me to motivate players to keep doing their best.

10. Since this was a really new side, did the bio-bubble help in getting the players together?

JF: I don’t really think the bio-bubble helped much in that sense, as players also need to disconnect from work and see relatives. I think in the end, the most important is that everyone has given his best for the team. Covid was not been able to lessen our desire to continue working to show our best version as a team.

11. The initial results were a bit jittery. Did you get anxious or nervous at any point in time during this period? What helped the team to turn things around?

JF: Not at all. After all, I think the most important is to spot mistakes, better yourself, look for alternatives and give it your all. That’s football.

12. As a coach, what were your biggest learnings from the season?

JF: My biggest lesson would be that in football, as in life, one has never seen or experienced everything. After the difficult situation of the pandemic, we have all had to adapt to new demands. I learnt a lot about myself during this season.

13. How do you assess your first season at FC Goa?

JF: It was a new challenge to adapt to Asian football but I am happy to see youngsters have been able to compete on an international level and that we could perform as a team altogether, supporting each other and working for the group.

14. Any message for the fans who couldn’t make it to the stadium this season?

JF: I will never tire of thanking the fans for their constant support, their positive messages and encouragement through social media – to the players, the staff and the club.

During the Champions League, I was proud to see that we represented an entire country: beyond badges, fans were coming together to support the team that represented India internationally. We did our best to be up to the job.