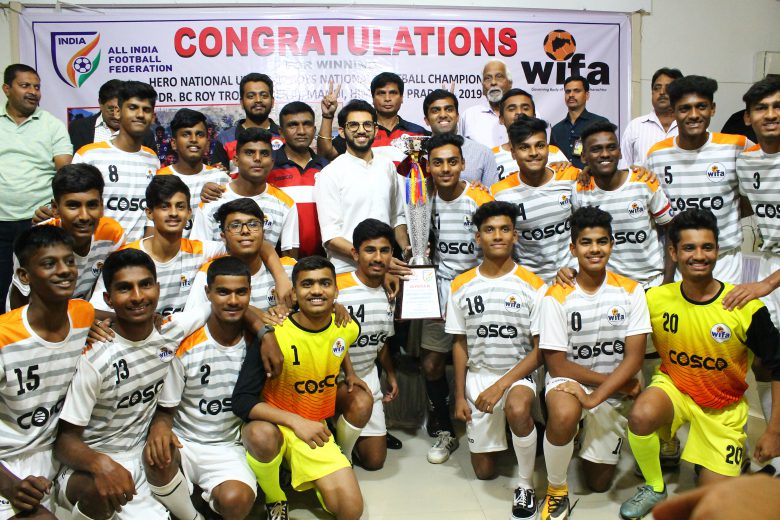 The Western India Indian Football Association (WIFA), Maharashtra acknowledged the achievements of their junior boys and felicitated the young Maharashtra football players for emerging champions of the AIFF Junior Under-17 National football championship (tier-II) for the Dr. B.C. Roy Trophy.

Speaking on the occasion, Thackeray congratulated the young footballers and told them to continue performing with the same intensity and bring more laurels to the state and that they should aspire to wear the Indian colours. “When you are playing a game all of you are handling it by yourself. You are coordinating with every other player on the field and it’s a very physical and mentally challenging situation and to come into tier 1 by winning the trophy is a big thing. Congratulations to all of you. The coaches also did a very good job and now they have to carry forward. We (WIFA) are prepared to extend whatever support is required,” Thackeray mentioned.

Thackeray also thanked the parents from encouraging and supporting their children to play football, but cautioned the youngsters not to neglect their studies as it’s very important.

Secretary Vaz said, “The youngsters have made Maharashtra state and the football fraternity very proud by winning the National championship. It was an apt reward for all the hard-work and the sincere efforts of the players, coaches and support staff and I wish them all the best for the future.”

It may be recalled that in the final last month, Maharashtra boys had pulled off a close 1-0 win against Tamil Nadu in Mandi, Himachal Pradesh. Striker Aditya Shah had scored the crucial goal on the hour mark to secure Maharashtra’s triumph.

Maharashtra has now been promoted and next year they will feature in the Tier-I competition.

Photo caption: The Maharashta players proudly pose with the Dr. B.C. Roy Trophy along with WIFA Vice-Presidents, Aditya Thacekary and Parth Jindal, during a felicitation function at the Cooperage ground on Saturday evening.