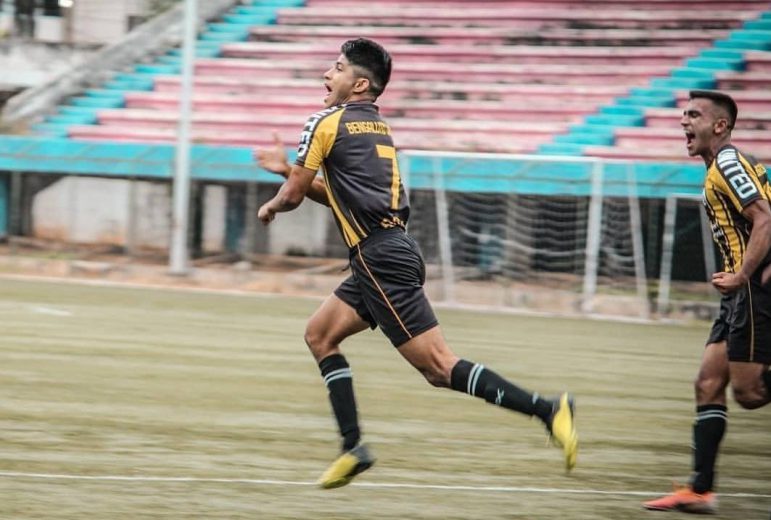 As Amey declares, his ambition since childhood has always been to represent India, be it in football, track and field or cricket.

Brought up in the northernmost neighbourhood of Mumbai, in Dahisar, Amey’s relationship with sports began at an early age. Amey was introduced to track and field in school. Growing up, he shifted to try his hands on cricket seeing his elder brother doing well in the sport.

“My journey as an athlete began with track and field in my early days. My elder brother used to play in the school cricket team and later represented the state team. I always idolised him and wanted to replicate what he does. Looking up to him, I shifted to cricket during my high school education”

Sports being an integral part of the Bhatkal family, brother Amogh Bhatkal carries on to do well in cricket. However, it took Amey no time to realize his real calling. At age 15, Amey shifted gears and started playing football. In no time, his prowess with a football gained attention. Shailendra School in Dahisar became Amey’s home turf and he firmly set foot onto the football field with bigger ambitions in mind.

“When I got into Junior College, I decided I wanted to focus on one thing and that is football. I simply loved the ball at my feet. The breathlessness after continuous sprints, the collective pace at which the game is played, and the ball rolling down the net when I score intrigued me. That’s when I decided, it is football that is going to be my way of life.” – Amey Bhatkal

Although for a professional footballer’s journey, Amey’s career started a bit later. His sheer hard work and dedication led him to achieve his goals. His passion was soon recognized by PIFA Sports Club. Within two years since Amey started playing, he represented PIFA SC at the Junior I-League. “It would have been great if I started my football career a bit earlier. I worked very hard to compensate for the missed years. Alongside my training, each day I watch technical and tactical sessions on online mediums to improve myself” added Amey Bhatkal

After Amey’s initial exposure at PIFA, he played against the elite teams in India. Playing well against robust opponents like the DSK Shivajians, Pune FC, Mumbai FC boosted his confidence. 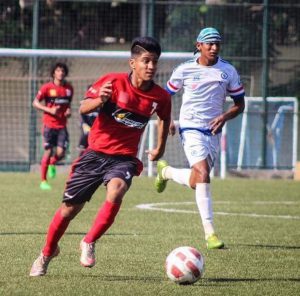 Amey’s next chapter began with Air India. He started to play under Coach Shyam Sawant. As Coach Sawant explains, the first day when he saw Amey, he was fascinated to see the hunger in him to score. Amey was selected thereafter and went on to be an integral part of the U-19 Air India team which took part in the MDFA Super Division.

“Amey was young when he came for the trials. The very first day I saw him, I was sure that this boy could make it big. His speed, agility and ball control at that age was commendable. He played a very crucial role in our title victory that season. Afterwards, he came to play under me at KSA for a brief period and left for the 2nd Division League soon. He is a very bright talent.”

As Amey explains, his time at Air India was crucial in shaping his career. Playing a pivotal role to win the Super Division with the U-19 team, he was promoted to the senior team where he trained under Coach Godfrey Pereira. Amey went on to clinch consecutive titles as they won the Elite League in the next year. His learnings at the team equipped him to better himself as a footballer. “The time spent at Air India cannot be matched. That is where the ball actually started rolling for me. Air India is one of the most professional clubs in Mumbai football. Playing for them, I have learnt how to keep composure and the right mentality for a game. The learnings imparted to me by Shyam sir and Godfrey sir is invaluable” said Amey Bhatkal

At Air India, Amey was guided by experienced footballers like Steven Dias and Vijith Shetty on the field. Mentored by arguably one of the best Indian midfielders, Amey spoke highly of Steven Dias. He informed that the on-field decisions and situational understanding gained from Steven helped him to make quicker decisions.

“As a senior player and mentor, Steven Dias helped me through the tough times. He encouraged me to go and play at the 2nd Division League. I envy his right foot. The crosses and free kicks he used to take made him a lethal player and opponents feared him. Off the field, he is a mentor to the juniors who will always guide and share his knowledge.”

Similarly, when we got in touch with Steven Dias, he was full of praise for Amey. “Amey is a very hardworking player. More than that he’s very focused. He knows what he wants in life and what is to be done to get success. We played together at Air India and KSA. I’m sure he will do good in future. Right now, his performance at Bengaluru United has been great. Training under Gourmangi Singh and Richard Hood, he will learn and better himself. I’m sure he has a lot to achieve and soon I’ll see him playing at the I-League and ISL. My best wishes are always with Amey for the upcoming seasons and his future” said Steven Dias

After a fruitful span at Air India, it was time for Amey to take the next leap. Having won the MDFA Elite Division, he signed for the Ahmedabad based ARA FC to play in the 2nd Division League. During that season, under coach Vivek Nagul’s guidance, the team was very close to qualifying for the final round. Unfortunately, they missed the next stop by a point.

“After winning the MDFA Elite, I thought it was the right time for me to be a part of 2nd Division League. I approached my agent Pranay Kapuria, who is more like a friend to me. He ensured a trial for me at ARA FC. Getting selected, I was exposed to a new environment in Ahmedabad. A friendly one. We played good football and I could see the fans growing as the season came to an end. It again was a great and important experience for me” 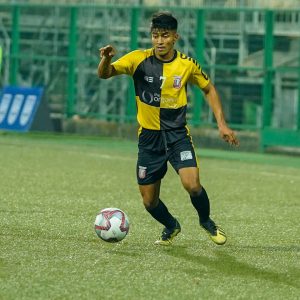 Amey is currently plying his trade for FC Bengaluru United in the 2nd Division League under Coach Richard Hood and Coach Gouramangi Singh’s guidance. As Amey claims, in the entirety of his professional playing career, the season with FC Bengaluru United has been the best so far. The home games have been amazing for the team, backed by the fans. Amey holds the record of scoring the first goal for FC Bengaluru United since their inception in 2019 against FC Goa Reserves. Apart from scoring the first goal, Amey played 12 matches in the BDFA Super Division scoring 6 goals and having 3 assists to his name.

“FC Bengaluru United has taught me what ethics and professionalism mean in football. Backed by excellent management, I get to learn every day about each aspect of life and football. One of the best moments with the team was when we played Mumbai City Reserves at Cooperage Stadium. A very proud moment for me as my family came to cheer and that’s where my journey as a footballer started.” – Amey Bhatkal

Talking about Mumbai football, Amey believes that the hierarchy of MDFA has enabled aplenty teams to take part and provide opportunities to many players. However, the city lacks teams at the national stage. “I see a huge pool of talent in Mumbai. We need to have more teams at the national stage to support the players. But at the same time, I feel that staying out of your comfort zone pushes you to improve as a professional and an individual.” said Amey Bhatkal.

Amey idolizes Sunil Chhetri from the national team and says that he is an inspiration. Amidst the uncertainty that has restricted people from doing their daily chores, Amey is spending quality time with his family and working on his fitness. Signing off, Amey apprised that playing football has made him believe in his dreams and he is working hard to achieve them. For now, he is focusing on his next challenge, and that is the I-League.