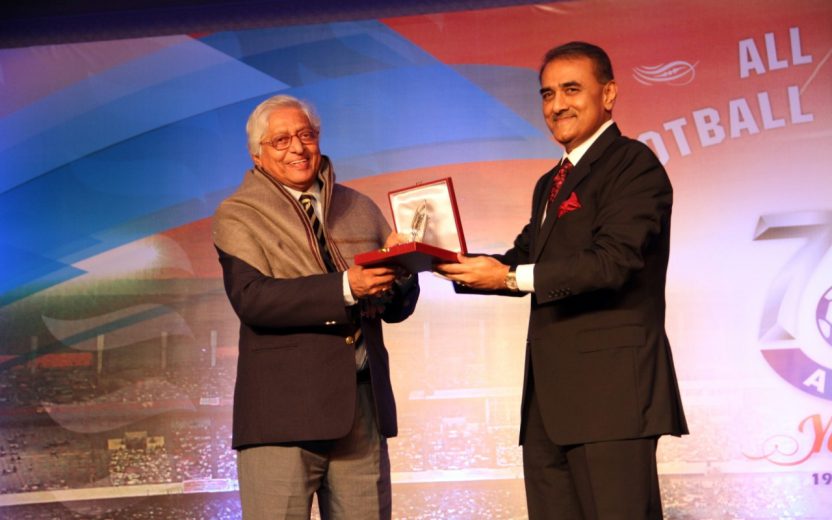 The harshest truth has hit us hard – it is a shocker to know that Chuni Goswami is no more. Chuni and I played together for the Indian National Team for nine years. We were very close and shared so many secrets. But today as my friend has left me for his heavenly abode, my heart seems empty at times.

My heart tells me that with the ball in my feet, and out of habit when I look up for him to make that run on the field, I will only see a vacuum. But my heart is still full of Chuni, and for Chuni. He will always be with me. Chuni Goswami was the Golden Boy, and he will remain the Golden Boy of Indian Football forever. Period.

On the field, he was total magic — a complete player. He could dribble, he could shoot, he could pass. His ball control was amazing. He could mesmerize fans and even opponents. The team that won the Gold Medal in the 1962 Asian Games was a fantastic bunch. But Chuni was above all. He was a treat to watch. He was pure entertainment, a complete package. He was our captain, our darling.

Off the field, Chuni was a true gentleman. He was gentle, extremely well-mannered, and articulate. He was accepted in all circles and could speak on any subject for hours. He could hypnotise audiences, both on and off the field. We were in constant touch till recent times. I got a chance to meet him for a Bollywood film shooting in our coach Rahim-saab’s memory. That forward line of Chuni, PK (Late PK Banerjee), and Balaram was just deadly.

One of Chuni’s exceptional qualities on the field was that off the ball, he could draw away players from you. The timing of his runs was amazing and defenders also ran with him even if he didn’t have the ball. And with the ball, he took the defenders with him, making them chase shadows for most times.

In the 1962 Asian Games, he played the captain’s role to perfection. There was no bossing around and he had that uncanny ability to read people’s minds. Together with Coach the Late Rahim-saab, he led from the front. He was in sublime form all throughout the Asian Games. I am often asked to describe him as a player. I can only say – he could score anytime and from anywhere. He was a match-winner. We were lucky to have him.

I remember one incident vividly during the course of the Asian Games, for which I have been grateful to Chuni forever. The Late Yusuf Khan was having a bad day in the office and his form on the day was making us run that extra bit, as it was putting extra pressure on our defence. I have always been a passionate guy, someone who has always worn his heart on his sleeve.

At one time, during a moment when we almost conceded owing to Yusuf not being up to the mark, I could not hold myself anymore and swore at him. Yusuf was a bit taken aback. I told him: ‘’We have all come to win this. Don’t let us down. You are capable of winning this one alone. What has happened to you?’’

At the end of the match, Yusuf, still unable to recover from the cuss words, complained to the coach about me. I was immediately summoned. I knew it was time to face the music. But Chuni came running and pleaded to Rahim-saab to forgive me. He even apologized on my behalf. I was taken aback. Minutes later, he put his arms around Yusuf and me, and took us for a walk. All the misunderstanding between Yusuf and myself vanished in a split second.

Another day, Rahim-saab was upset with PK, who was not his usual self during the first-half of a match. PK seemed unwell, so much so that he vomited in the dressing room at half-time. Rahim-saab was extremely disturbed. ‘’I have 18 players in my squad. If you are unwell, you need to tell me. I never expected this from you,’’ the coach thundered.

The entire squad was dumbstruck seeing the coach so furious. But again, Chuni took control. He went up to PK, consoled him, and told Rahim-saab: ‘He is our asset. But he is unwell today. He will be back stronger.’’ Rahim-saab looked at Chuni into his eyes, and turned away. Such was Chuni’s personality – he was always undaunted, yet so matured and calm.

In the build-up to the final, he led from the front. The Late Jarnail (Singh), PK, Balaram, Chuni, Balaram and myself sat and chatted at length. We took an oath not to return empty-handed. ‘’We have come this far. How come we cannot win this one. Tell me, are they (South Korea) superior to us?’’ he queried. He just kept on reminding us of our abilities.