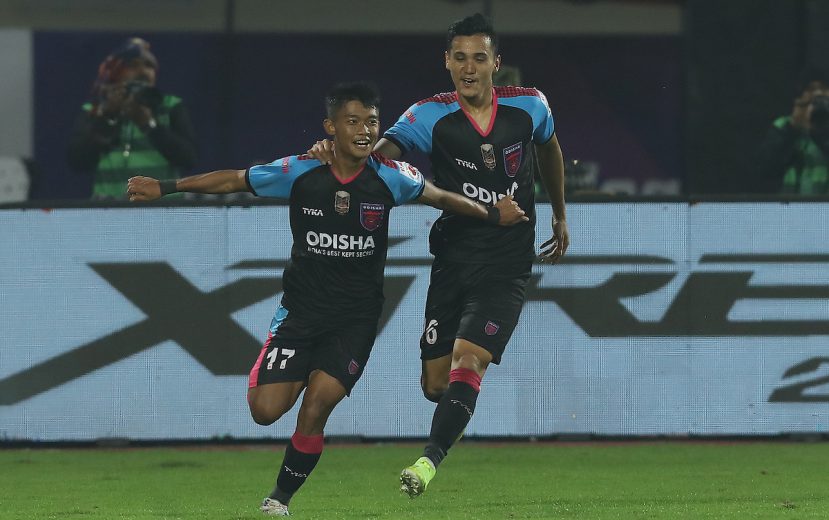 Odisha FC registered an important win after getting the better of Chennaiyin FC 2-0 in a Hero Indian Super League clash at the Kalinga Stadium here on Monday.

First-half goals from Jerry Mawihmingthanga (37’) and Vinit Rai (41’) were enough for Josep Gombau’s side to make it three wins out of their last four matches.

The upturn in form has seen Odisha FC (15 points from 11 matches) climb to within a point of fourth-placed Mumbai City FC. A fifth defeat of the season for Chennaiyin FC sees them languishing in ninth position.

The game got off to a scrappy start with the teams struggling to string together any move of note in the first 20 minutes. However, action livened up in the 21st minute when Marcos Tebar headed in an Odisha FC corner only to see the referee disallow the goal for an obstruction on Chennaiyin goalkeeper Vishal Kaith.

Immediately, Nandhakumar Sekar wasted a glorious chance to give the home side the lead after blazing away Xisco Hernandez’s square ball into the box with the goal at his mercy.

In the 24th minute, there was more drama as Shubham Sarangi was adjudged to have wrestled Chennaiyin striker Nerijus Valskis to the ground while contesting a cross inside the box. The referee awarded a penalty, but Valskis sent the spotkick well over.

Chennaiyin would regret that miss as Odisha scored two goals in quick succession to floor the away side. In the 37th minute, the lively Xisco fed Aridane Santana down the right-wing. He flashed a cross across the box which was missed altogether by Vishal Kaith and Laldinliana Renthlei. Jerry Mawihmingthanga had an easy task of tapping it in to give Odisha the lead.

Four minutes later, Chennaiyin were left stunned as Vinit Rai, after receiving the ball from Tebar about 20 yards from goal, unleashed a powerful strike that beat Kaith all ends up. After the restart, Chennaiyin showed a bit more urgency in their bid to claw back into the game but could not really settle into any rhythm.

Lallianzuala Chhangte and Rafael Crivellaro did get into threatening positions but could not find a telling final ball as the away side’s frustrations grew. In the 67th minute, Odisha goalkeeper Francisco Dorronsoro was called into action and had to dive full length to keep out a cross from Andre Schembri that looked heading into goal.

Odisha looked comfortable in dealing with whatever Chennaiyin threw at them as they saw off the game without further scares to notch a very important victory.