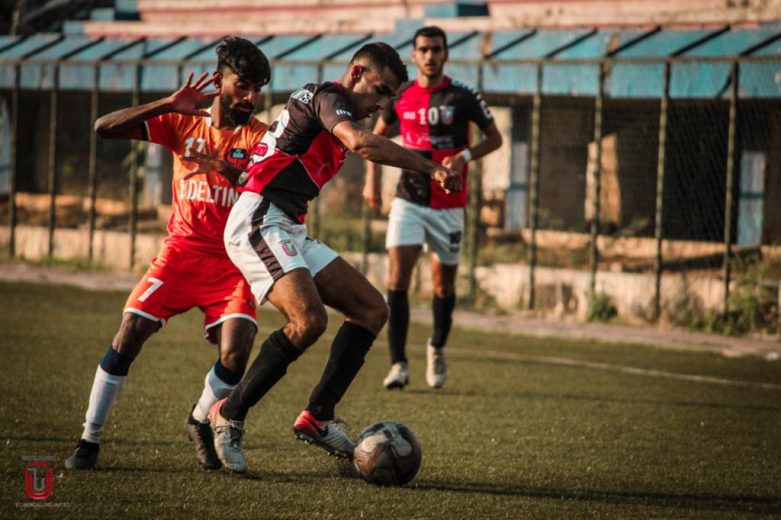 Growing up in Mumbai, Hardik started playing football at a tender age. He studied at Hansraj Morarji Public School, the place where he was first introduced to the game. Unlike most of the other children in Mumbai, Hardik always had an affinity to play football since childhood. “As a kid, you go where your heart takes you, and my heart always wanted football. I never had a second thought about that. As I kept growing, my passion for the game kept getting stronger” said Hardik.

Since childhood, Hardik was keen to explore the opportunities in Indian football. However, due to lack of infrastructure and awareness, Hardik found it difficult to comprehend the way forward. “I remember once a teacher told that I won’t be a footballer due to my height, physical attributes and the shortage of opportunities in Indian football. After that day, my urge to become a footballer upgraded” recalls Hardik.

As Hardik goes on to explain, after finishing his Xth standard, he joined MMK College in Bandra for the sole purpose of playing football.

“I joined MMK College, Bandra to play football. MMK College is renowned for its sporting activities. I was training under Coach Raja Das, who also had a team in the MDFA 3rd Division. He provided me with an opportunity to play in his team. That was my first taste of Mumbai football.” – Hardik Bhatt

Hardik continued to play football at a semi-professional level until he reached standard XII. Picking up interest in cooking, Hardik opted Hotel Management and decided to make a career in it. “I had picked up a lot of interest in cooking and decided to do Hotel Management as my undergraduate degree. Since childhood, I was getting brainwashed that making a career in football is not viable. Slowly, I fell into the trap and decided to continue playing as an amateur” said Hardik.

As Hardik describes, he never wished to leave football. His parents always supported him. Although he was surrounded by people who made him feel that football cannot be his way of life. At that time, Hardik was still playing for an MDFA 2nd Division team. “I had people telling me that there are 1000s of footballers waiting for an opportunity, how will you make it? It broke my morale and I started feeling the same way. However deep inside, the little Hardik still craved to play football. I was losing hope and felt like giving up. I’m thankful that my family always stood beside me. They have been there through thick and thin” exclaims Hardik.

Things worsened for Hardik as he spent a month on his Hotel Management course. His schedule became so weary that he didn’t have time for himself, let alone playing football. He used to only get some time to play on weekends with his friends.

“Within a month of my Hotel Management course, I realised that this is not something that I aspire to do. My days were very long, tiresome and I was deprived of football. I became like a Sunday League player. Work on weekdays, football on weekends” said Hardik.

Push yourself, because no one else is going to do it for you. 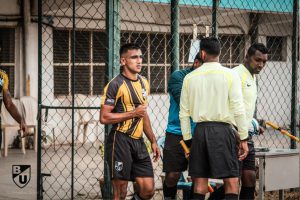 Hardik made a firm decision. As soon as he finished a semester, he discussed with his parents to quit his degree and try his luck on a football pitch. No questions were asked from the other end. Hardik took a year off to chase his dreams.

“I couldn’t take it. I couldn’t be away from football. It was getting on my nerves. I felt I needed to be back on the pitch. The time I spent away from football made me come even closer to it. I realized football is my way of life. I won’t be able to live without it.” – Hardik Bhatt

Hardik kept his calm and decided to start by bettering himself at first. “To begin with, I bought equipment and designed my training sessions with the help of Google. Since getting a training ground in Mumbai has always been daunting, I decided to practice at Juhu beach,” explains Hardik.

He continued his training for a year until he felt that his preparations seemed well to search for clubs. “After a year of self-training, I decided to search for a club. I felt the need for game-time now because no matter how much I train myself, football is a team game” informed Hardik.

“I met Darren at Kopana Football School. That was the first time I came to know a professional footballer. Ever since I met him, I have learnt so much from him. He helped me get my basics strong and improved me overall. I picked up very strong values of the sport from him. He has shaped me as a footballer” – Hardik Bhatt

Speaking to Darren, he too was full of praise for his junior. “First and foremost he’s a good kid. Listens to his mentors and always wants to improve. Someone who is willing to work his socks off. I’ve watched him play and he’s strong, quick and technically sound. You don’t always find all these qualities in a player. He has the attributes to be a top player in India. He’s still young and with the right coaching and training, he is only going to get better. I definitely see a bright future for him” quoted Darren Caldeira, who plays for Kerala Blasters in the ISL.

“I think the biggest turning point in my career was shifting my position. I had never played as a defender before. Coach Ansari bestowed his trust in me and introduced me to a new position” – Hardik Bhatt

Hardik plied his trade for ARA FC the next year. As he explains, his season with ARA FC was filled with new learnings. “It was a good season for me. Playing in a new environment, at a new place was a learning curve for me. Training under Coach Vivek Nagul has made me a better footballer” said Hardik. 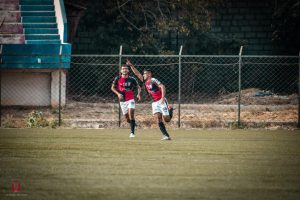 After spending a fruitful season at ARA FC, Hardik joined FC Bengaluru United to play in the Bangalore Super Division. ” My agent Mr Pranay Kapuria informed me that there’s an opportunity at FC Bengaluru United and explained the facilities they have there. I heard a lot about coach Richard Hood and always aspired to train under a prominent player such as Gouramangi Singh.” apprised Hardik.

As he quotes, FC Bengaluru has been a blessing in disguise. He scored and assisted in his debut at the 2nd Division League against Mumbai City Reserves. Hardik said, it is a “dream for any player”.

“A growing player needs a club like FC Bengaluru United. The facilities they provide and the way they treat their players, we really feel satisfied and get the urge to do better. I’m humbled to receive the opportunity to play for FC Bengaluru and by far, playing for them has been the best experience” apprised Hardik.

“Training under coach Richard Hood has made me disciplined and understand the various aspects of the game. I want to thank Coach Gouramangi Singh and Chelston Pinto for always motivating me” – Hardik Bhatt

Speaking to Richard Hood, he informed that he is very satisfied with Hardik’s performance. “He is a very humble personality who is willing to grow. Hardik has the potential and a good future awaited for him. Overall, he is a great ambassador for the team” quipped Richard Hood, the Head Coach of FC Bengaluru United.

Amid the pandemic, Hardik is maintaining his daily regime. As he signed off, the 23-year-old apprised that not only does he want to play for his nation, he wants to represent India in the World Cup.

Also Read: “I want to have a significant impact for which people will remember me forever” – Calvin Baretto

Bala is an inspiration to all women footballers: Praful Patel
A referee cannot afford to be star-struck, says Rowan Arumughan