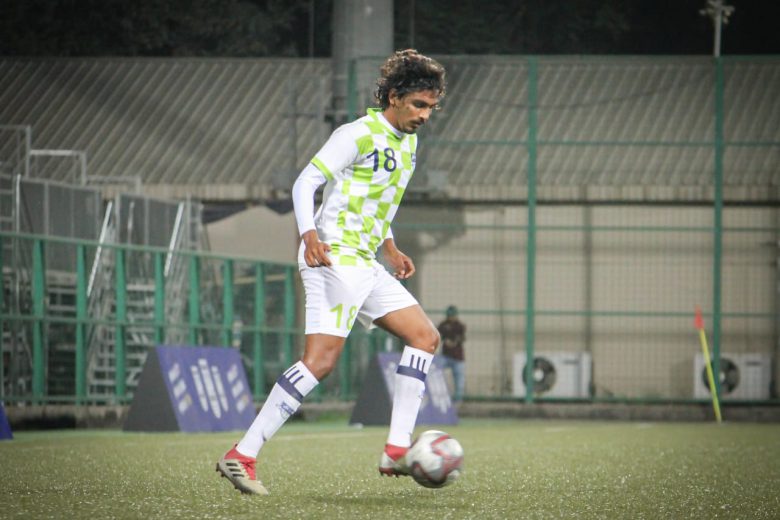 Despite having their original roots from Goa, Calvin was the first person in the Baretto family to play football. Calvin was raised in Mumbai. He was introduced to sports at a tender age, where he kicked off his journey with athletics.

Calvin studied at St. Dominic Savio High School, which is regarded as a hub for producing sportsperson in Mumbai. Pursuing athletics for two years, Calvin felt that he needed to have more engagement with his friends. Hence, he opted football. “I joined football training in school. I was in Standard III. The reason to shift gears from athletics to football was that I wanted to spend more time with my friends” said Calvin.

As Calvin narrates, since childhood his parents have been very supportive. His mother would spend time watching her son practise for hours, and his father would lift his spirits on one of those days. “To succeed in life, you need supportive parents. And I’m proud to share that throughout my journey, my parents were the backbone. As a kid, I was the one spending more time outside. I was put into athletics by my parents, but the day I urged them to enrol me into football, no questions were asked.” says Calvin.

However, the only deal between Calvin and his parents was that there should be no compromisation with education. Calvin has stayed true to his commitments. He is into his last year of graduation.

“I still remember how I used to cry because my tuition teacher would extend the classes and I would be late for my practice. I used to have tuitions before my football practice, and on some days I would get late or miss the practice due to the classes. My mother talked to my teacher and ensured that I am allowed to leave for my practice sessions on time.” – Calvin Barreto

Calvin was first spotted in Kalyani, West Bengal. He was representing the U-14 WIFA State Team in an AIFF organised tournament. “On 7th November 2014, I was selected in the AIFF U-14 Academy after a series of good performance for the state team. I was asked to come to Bangalore. It was the first time away from home and I was very nervous. My parents always backed me and ensured that I do well” said Calvin. Within three months, Calvin left for his home due to an injury. As he recovered, his Xth board exams were looming. Finishing the exams, when he decided to be back, the academy was disbanded for reasons unknown.

Calvin’s next breakthrough came with Mumbai FC. He joined the U-17 team and represented them for three years until the team shut shop.

“Mumbai FC was my second family. All of us were together aiming to play the I-League. We trained, ate, and travelled together. My fondest memory was when I scored a goal against PIFA SC to win a match. It is so unfortunate that Mumbai FC had to close down.” – Calvin Baretto

At Mumbai FC, Calvin trained under Alex Ambrose, Kunal Chandra, Arshad Hussain, and Jeddy Almeida. In his early days, he practised under coach Alex. “I would cherish the learnings imparted to me by Alex Ambrose. I loved his intense training sessions” said Calvin. Speaking to coach Alex Ambrose, he too was full of praise for his student. “Calvin was always emotionally connected to the game. His drive to improve will surely take him a long way” quoted Alex Ambrose.

“The driving force for Calvin has been his desire to become better. Most of the players in Mumbai fizzle out after they complete their schooling. But Calvin’s motivation has been his parents. Calvin is very humble, a down to earth person. He has a magical left foot, and a great physique. He has a very bright future ahead of him. He could be a national team material” said a top coach from Mumbai, and an AIFF Coach Instructor who mentored him at Mumbai FC.

After Mumbai FC, Calvin plied his trade for Kenkre FC at the MDFA Elite Division. As he reiterates, his favourite moment at Kenkre was scoring against ONGC. “My best moment with Kenkre was when I scored against ONGC, the same season when they rejected me. I’m thankful to Joshua sir for providing me with the opportunity,” claimed Calvin.

After gaining exposure at the Elite League, Calvin made up his mind to take the next stride in his career. He gave several trials outside Mumbai. Finally, he got a call up from Bangalore and joined Bengaluru FC Reserves. As Calvin explains, his time at Bengaluru has shaped him as a professional footballer.

“I remember how confused I was when I got the call for a trial at Bengaluru FC Reserves. Somehow through a friend, I managed to reach Bangalore and nailed the trials. Training under Naushad Moosa has developed me as a professional. Under his guidance, I learned the small understandings in mentality and tactics which makes a huge difference and what proper diet means to become a professional footballer” – Calvin Baretto 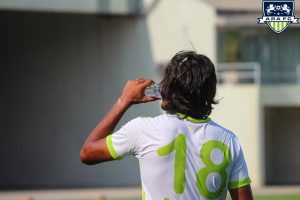 This season, Calvin was invited by coach Anthony Andrews to give a trial at the newly formed ARA FC. “Coach Anthony Andrews called me for the trials in September at ARA FC. They wanted to form a team quickly as they were going to have a practice match against Chennaiyin FC Reserves. I featured in that match after being selected in the trials. In December, they asked us to report in Ahmedabad for the 2nd Division I-league” quipped Calvin.

Speaking to Anthony Andrews, he informed that Calvin is a great human being. “I met Calvin 2-3 years back. Calvin is very hardworking. I understand that every professional footballer is hardworking, but I feel he is a bit different. He self realizes his shortcomings and comes to his coaches to better himself. Calvin is very professional at a young age. He is very punctual in maintaining his diet. Often I see Calvin reporting to the practice half an hour earlier than the scheduled time” quipped Coach Anthony.

Speaking about his playing capabilities, Mr Andrews believes that Calvin is one of the most versatile players in the team.

“Originally, Calvin is a midfielder. But when required, he has always adapted for the team. I’ve seen him doing well in the left-back, in the wings. He’s a person who thinks for the team. It’s not always that you see a professional willing to adapt. He is an excellent playmaker and can run the show, but Calvin will never say no if you want him to play somewhere else” – Anthony Andrews

Calvin claims that he is enjoying his time at ARA FC. The environment and the facilities provided to them is turning out to be beneficial for his development. “The first day when I visited the ARA FC campus, I made up my mind. This is where I want to be. I gave my best efforts and was called up by Vivek sir to represent the team in the 2nd Division League.” quipped Calvin.

Talking about the current scenario in Mumbai football, Calvin apprised that he is not happy.

“I’m not sure about the future of Mumbai football. There is only one professional club and that is Mumbai City FC. I hope that we have more clubs in the upcoming time. Travelling outside Mumbai to play at a young age is difficult, but it surely helps in your transition from a boy to a man. It is my dream to represent a local club at the national stage” – Calvin Baretto

Calvin believes that the current pandemic situation is not an offseason for him. Instead, he is working harder to bounce back once football resumes. “Let me tell you, this is no vacation. Keeping in mind that we could have the final round of the 2nd Division League, I’m highly motivated right now. I’m training twice a day. Also, I’m maintaining a strict regime. Waking up early in the morning has always been a priority” informed Calvin.

Idolizing Harmanjot Khabra from the national team, our Indian Baretto, who is currently a 20-year-old, apprised that his ultimate aim is not just to play in the ISL or for the national team. He wants to create a legacy for which he will be remembered forever.