A referee cannot afford to be star-struck, says Rowan Arumughan 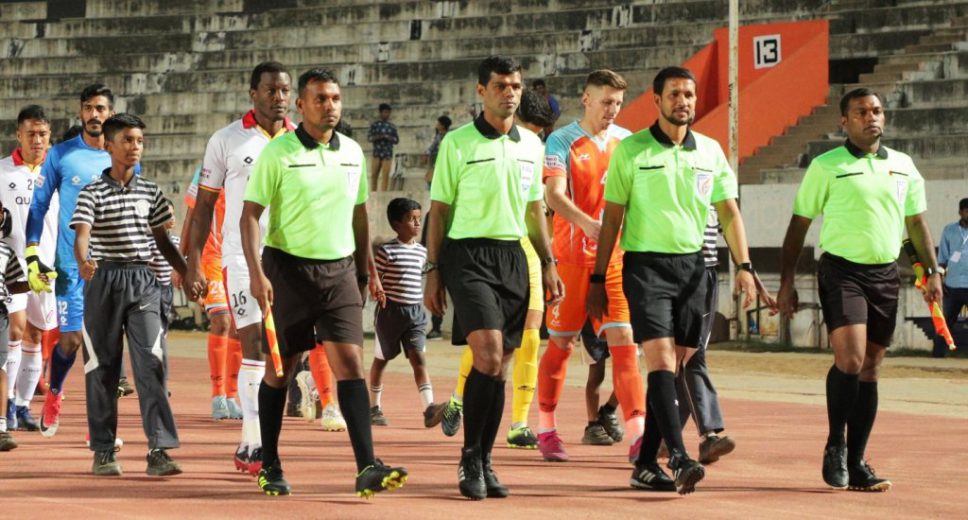 As they say, officials are the third team playing on a football field whose contribution to run a successful match often gets unnoticed. It’s a thankless job indeed but they can’t afford to rejoice a successful match as they need to get into the preparation mode for the upcoming one.

“Yes, preparation is of utmost importance for the officials. When two teams get ready for the 90 minutes, referees also need to be on their toes throughout,” Rowan Arumughan, a FIFA referee, mentioned.

“We need to know every player’s skill set, strength and weaknesses. We should not get confused and make mistakes which will ruin the entire match. It is fast and we need to make a decision within a blink of an eye. Those decisions make a referee’s career. We are still learning this from Asia’s premium ones like Nishumura (Yuichi Nishimura, Japan), Ravshan (Ravshan Irmatov, Uzbekistan), Ali (Alireza Faghani, Iran),” the 40-year-old added.

“Yes, we are working very hard. One decision builds or breaks a referee’s reputation. Even referees like Yuichi Nishimura, Ravshan Irmatov, Alireza Faghani took some time to take off. They got the right opportunities and utilised those which makes them great.”

“AS A REFEREE, I’M IN CHARGE OF THE MATCH”

We have often seen players challenging the referees and the entire situation goes beyond control often, but not with a seasoned customer like Rowan who has learnt to deal the high profile players since the days when he used to officiate local league matches.

“Experienced players test the referees with their tactics. If I respond to them, they will take me for a ride. As a referee, I’m in charge of the match and if I feel it is an offence, I won’t hesitate to penalise the offender.”

But, the process doesn’t end there at all. He shared how he takes it forward and discusses it with the player or group of players, whenever he finds an opportunity.

“After a while — might be during a throw-in, substitution or a tad break, I speak to the player respectfully but with a conviction. Sometimes, they get carried away by their stardom, though. But I am assigned to act according to the situation, nothing else and that’s what I do. Players also respect that,” Rowan shared.

Even, he shared a tiny but important bit of knowledge for the upcoming referees. They must hone their skills in the district leagues, state leagues which will help them shine in future.

“If the players find a new face, they try to create more pressure which will make you fragile. But, if a referee comes with experiences of local league matches, he’ll not face trouble at the higher level. Our instructors always recommend officiating more district league, state league matches to get familiarised to the unfamiliar situations,” Rowan maintained.

“ONCE IN A LIFETIME OPPORTUNITY”

Rowan has officiated quite a few high-profile matches in his 20-odd-year long career as a pro but one match that he heralds as the ‘most memorable’ was the FIFA friendly match between Argentina and Venezuela at the VYBK Stadium, Kolkata on September 2, 2011.

“That is the most memorable match for me. Gautam-Sir (Col. Goutam Kar (Retd.)) and Ravi-Sir (Ravi Shankar) asked me to keep it simple and count it just as another match,” Rowan continued, “I still remember Gautam Sir’s words: Don’t get star-struck. At the end of the day, you are the referee. They may be Lionel Messi, Angel Di Maria but you are the boss at the ground. Act as you act in the domestic matches.”

Rowan always prefers to study the players beforehand which helps him take decisions without much fuss. Mascherano, Lionel Messi, Angel Di Maria, Sergio Aguero – the bigwigs of the La Albiceleste used to represent Barcelona, Real Madrid, Manchester City whereas Venezuelan boys used to play in lesser-popular leagues which were not telecast in India.

“I could follow the Argentine players from EPL, La Liga, Bundesliga but Venezuelan players used to play in those leagues which were not broadcast in India. Ravi Sir advised me to get clips,” Rowan continued. “Both teams played the same brand of possession-based football, they were looking to cut in diagonally from the wings to hurl attack on the opponents.”

Dinesh Nair and Biplab Poddar were the assistant referees whereas Pratap Singh was the fourth official that day. The Indian contingent pulled off a fantastic job and both teams praised their proficiency after the final whistle.

“I started my career with Pratap on the same day, back in 1999. Biplab-da was senior and much experienced than me, so was Dinesh who had already done quite a few Kolkata Derby matches until then. The camaraderie amongst us worked for me. I can’t thank them, including Goutam-Sir and Ravi-Sir, enough,” Rowan sounded nostalgic.

Also Read: Bala is an inspiration to all women footballers: Praful Patel