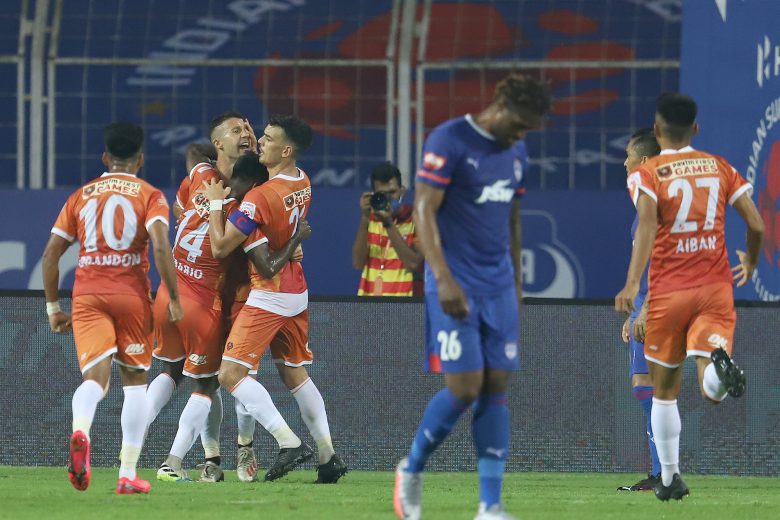 Gaurs fans share their reaction to an action packed Sunday evening that saw FC Goa come back from 2 goals down to take a point home.

In an intense encounter, Gaurs showed extreme determination and spirit as Igor Angulo’s 2nd half brace rescued a point for Goa after the Southern Eagles had taken a 2 goal lead by the hour mark. Cleiton Silva and Juanan had given Bengaluru a 2-0 lead before some inspired substitution from Coach Juan Ferrando brought the Gaurs back in the game. Midfielder Brandon Fernandes and Jesuraj Romario combined well with Igor and Ortiz to strike two quick blows in the space of five minutes as the match ended 2-2.

At the end both teams looked likely to score a winner but a point was perhaps a fair result. Gaurs at home lauded the  new recruit Igor and believe him to be perfect replacement for Coro.

We spoke to a few fans about their reaction to the FC Goa comeback.

“Making a comeback in an ISL game against Bengaluru FC is no joke since they have the best defence lineup in the tournament. We were 1 goal down at the end of the first half. It was a heartbreaking moment when the second goal went in. But it is never over in football until the final whistle. There was always hope as a football fan and exactly that happened, Brandon and Romario’s entry changed the game, five minutes, two goals. The credit should go to our mastermind, Juan Ferrando”, said Rajdeep Desai, a hardcore FC Goa fan.

Abhishek Sawant, another Goa fan was impressed with the team as a whole, but the standout performer for him was Jorge Ortiz. He said “Great to have football returning and watching FC Goa play again. FC Goa and Bengaluru FC matches are always tough, especially this year with a very new team. Securing a point after being 2-0 down is no joke and overall it was a good game to watch. But one player who impressed me the most was Ortiz. Excellent touches, classy runs and the fitness displayed by him. Best signing in the FC Goa midfield by far. Substitution made by Juan was the game changer”.

Brandon Fernandez was the best playmaker last season in the ISL as he created 44 chances. His introduction early in the first half has been termed as the changing point in the match by many. FC Goa fan Nishant Hegde was of the same opinion and was highly impressed with the Goa and India midfielder. “A 2-2 draw against a champion side like Bengaluru FC is never a bad result. Noguera had his moments, Ortiz looked threatening too and Igor established that he’s our new goal machine. But the standout performer for me was Brandon Fernandes. The way he came onto the pitch and acted as a catalyst for both the goals with his play making skills shows us why he’s one of the best Indian midfielders right now”, said Nishant.

Igor Angulo scored a brace and showed the fans that he will be the perfect replacement for ISL’s top scorer, Ferran Corominas. Pravin Satarkar, an FC Goa fan, said “It was a great game for the Gaurs. We were 2-0 down in the 57th minute and bounced back from that position and snatched a point from the Blues. What I liked about yesterday’s game was the attacking mindset of the players and the coach. The substitutions in the second half proved to be vital for us. Brandon showed us with his playmaking skills why he is one of the best midfielders in the ISL””.

Fellow Gaur, Kunal Kunkoliker, was impressed with the striker. “The best player on the pitch undoubtedly was none other than Igor Angulo who scored a brace. But the other players like Ortiz and Noguera also had their moments in the game. Brandon and Romario, the two subs proved to be the game changers”, said Kunal.