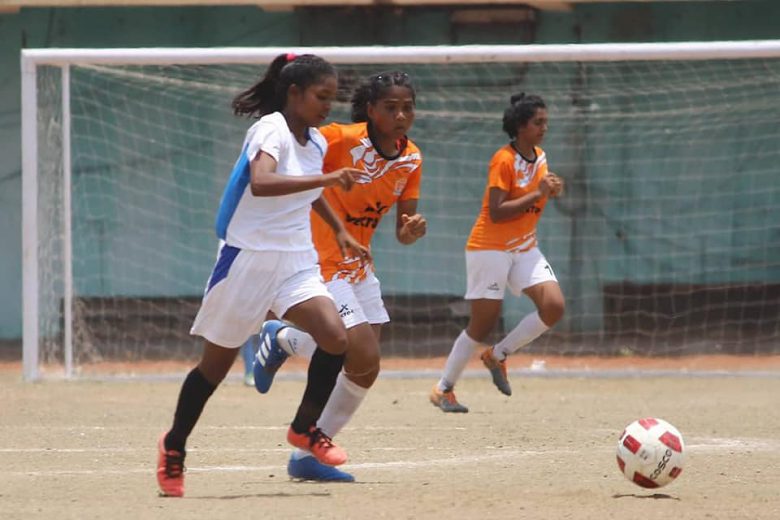 Defending Champions Nagpur and title contenders Mumbai were knocked out of the tournament by a determined Buldana and Gondia respectively, meanwhile Kolhapur and Pune continue their dominance in the tournament.

Kolhapur continued their dominant run picking another comfortable 3-0 win A cross from the left flank was converted it into beautiful goal by Pratiksh, who also doubled the lead six minutes later via penalty. Sarika Chaugale added one more goal late in the game to complete the 3-0 win.

Pune’s excellent attack put them in the strong position with 2 goals in the first half scored by Pooja Waghire, Murial Adam. Pune were relentless in attack throughout the game as they continued their attacks and managed to add 3 more goals in the second half. Ritu and Pooja went on to complete a brace each as Pune entered semis beating Thane with 5-0 win.

Buldana started brightly with an attack right from the beginning of the game. Though Buldhana’s attacks were stopped by Nagpur’s rock solid defense, Buldhana managed to take lead just before the first half with Aishwarya Bhonde’s powerful volleyed short from center of the box finding the back of the net. After taking the lead in first half, Buldana in second half defended well to hold the lead and enter the Semifinals with 1-0 win.

Mumbai started off well with some quick attaching moves; however, Gondia held the fort well and were brilliant in defense as their goalkeeper Khushboo pulled off numerous saves to deny Mumbai a breakthrough. Throughout the game, Mumbai came close to scoring a goal on number of occasion but a resolute defending from Gondia would continue to deny them.

Eventually, Gondia were successful in stretching the game to Penalty shootout. In penalty shootout, both the team’s goalkeeper saved two attempts and stretched the game further to sudden death. In the 10th attempt of penalty shootout, Mumbai’s kick taker shot the ball wide, while Gondia’s Ranu converted her attempt to take the team through to Semifinals.