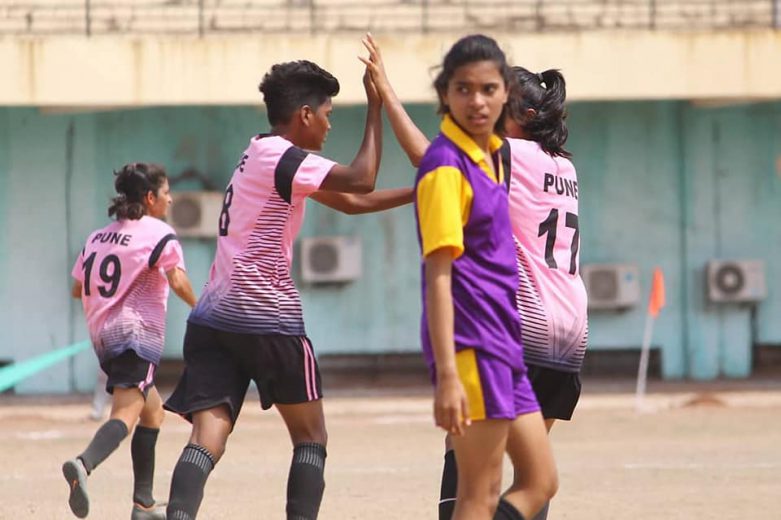 Day 2 of the WIFA organized Women’s Inter District Football Tournament ended with 16 teams facing each other in a knock-out game. Buldhana, Pune, Kolhapur, Amravati, Thane, Mumbai, Gondia and Nagpur entered the next round for Quarter Finals.

Buldhana ( Aishwarya Bhonde 2’, 6’, Dipsika Hiwale 8’, Priti Khare 28’) 4-0 Washim
In the first match of second day, Buldhana started the game with quick goals in the early game, taking 3-0 lead within 8 minutes of play. Aishwarya Bhonde scored brace while Dipsika added the third as Buldana went 3-0 at break. Washim defence improved but they failed to mount a comeback as Buldana knocked them over 4-0 courtesy of a 4th goal from Priti early in the 2nd half.

Pune ( Abhilasha Mehra 14’, Muriel Adam 16’ ) 2-0 Nashik
It was an intense game between Pune and Nashik that was witness of some great defense from both the sides. In first half Pune was better in attacking scoring 2 quick goals to take an early 2-0 lead. In the second half Nashik’s superb defense saved goals but their lack of forward movements hurt them as the game ended up with 0-2 goals. Pune’s brilliant game led them into the next round.

Kolhapur ( Adhika Bhosle 1’, 8’, 19’, 47’, Pratiksha Mithari 2’, 26’, 45’, 50’ , Jyoti Dhere 5’, 13’ ) 10-0 Beed
Kolhapur the team with full of confidence and energy entered in the tournament and became the highest scoring team with 10 goals in a single match. They dominated the opposition team Beed who played their first ever district match. Adhika Bhosle and Pratiksha Mithari were top scorer with 4 goals each as Kolhapur entered the next round in some style.

Amravati ( Namrata Vike 18’, Sonam Mishra 23’, Anisha Kumbre 29’, Ashwini Ganvir 33’ ) 4-0 Ahmednagar
Ahmednagar were brilliant on attacks the other day but failed to maintain the same tempo in today’s match. Amravati impressed with high intensity, skills and energy. In first half both the sides played tremendous game but it was Amravati’s Namrata Vike, Sonam Mishra who succeeded in scoring. Amravati added two more in second half courtesy of Anisha and Ashwini to qualify for the next round.

Thane (Jagruti Moholkar 15’, Nirmity More 16’, Navya Koshi 26’, Paromita Chakravarty ) 4-0 Sangli
Sangli could not stop Thane’s attacking game, who were brilliant in both the sessions. In first half Thane scored back to back goals to take a quick 2-0 lead. After break, Thane continued with the same spirit and bagged 2 more goals. Thane’s strong defence didn’t allow Sangli to come forward while they trampled ahead to score four.

Mumbai (Karan Pais 11’,Riya Sukhdeve 25’, Pranali 33’,Florian 37’) 4 -0 Palghar
One of the crucial matches of the tournament. As both teams Palghar and Mumbai are termed favorites. Mumbai took the early lead in game with some good movement in the attack. Mumbai’s attack as well defense was brilliant as compared to Palghar. Mumbai bagged couple of goals in first half and continued the second half with same energy and added two more goals to beat Palghar with the difference of 4 goals. Palghar attacks failed to break a resolute Mumbai defence as they failed to score any.

Gondia (Heena 6’, Trupti 10’, 34’, 36’ , Aishwarya 14’ , Archana 40’) 6-0 Aurangabad
Gondola’s consistency in attack and Aurangabad’s deficiency in defence turned the game in Gondia’s favor right from the start as they have made it 3-0 within the first 15 minutes of the game. Trupti stared for Gondia with a well deserved hat-trick while Aishwarya, Archana and Heena added three more to the tally.

Nagpur ( Bobby Gedam 8’, 43’ ) 2-0 Dhule
In this last game before quarter finals, Goals from Bobby Gedam either side of the game gave Nagpur a comfortable 2-0 win over Dhule. The latter lacked in their forward attack while their defense did a decent job to restrict the goals to just two.