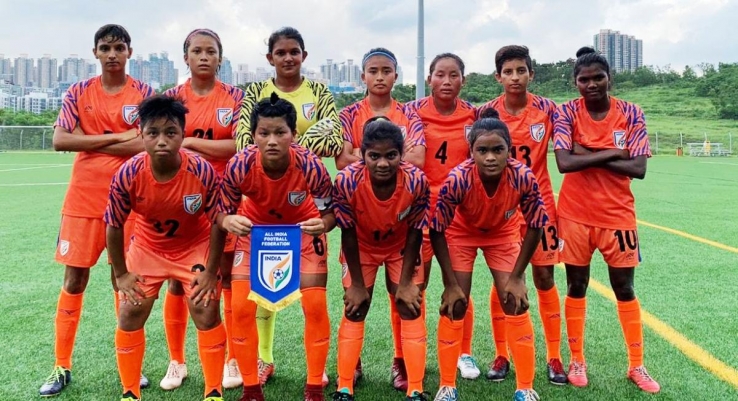 The Indian girls could not get off to a better start than this as Priyanka scored their first goal in the 2nd minute of the match. After opening the scoring early, India came close to adding another when Nirmala tapped in a long ball from Nirmala from midfield.

A minute later, Hong Kong drew level when the striker tapped home a looping cross from the wing. However, Indian girls didn’t show any intention to take their foot off the pedals and Shilky snatched the lead once again in the 21st minute. Two minutes later, an over-enthusiast Sumati, having outpaced the opposition defender, took it on her own but the Hong Kong goalkeeper intercepted to avert the danger.

Martina, Astam and Kiran, who were deployed at the heart of the midfield by coach Alex Ambrose, carried out the job of feeding the attackers exquisitely. Two minutes to the end of the first-half, Kiran doubled the lead to take the scoreline to 3-1.

There was no stopping for the Indian girls as they took only four minutes after the resumption to pounce on the local team once again. Sumati made an effort from long-range, which was fisted by the opponent goalkeeper. The shrewd striker chased the second ball and hit the target on the rebound.

Astam joined the party when she took the tally to five at the stroke of the hour-mark. Sumati pulled the trigger from a wide angle, as Astam didn’t hesitate to breach a listless Hong Kong defence on the rebound once again in the 58th minute.

India will face-off with Tai po in their second match of the exposure trip in Hong Kong on Sunday, June 23, 2019.