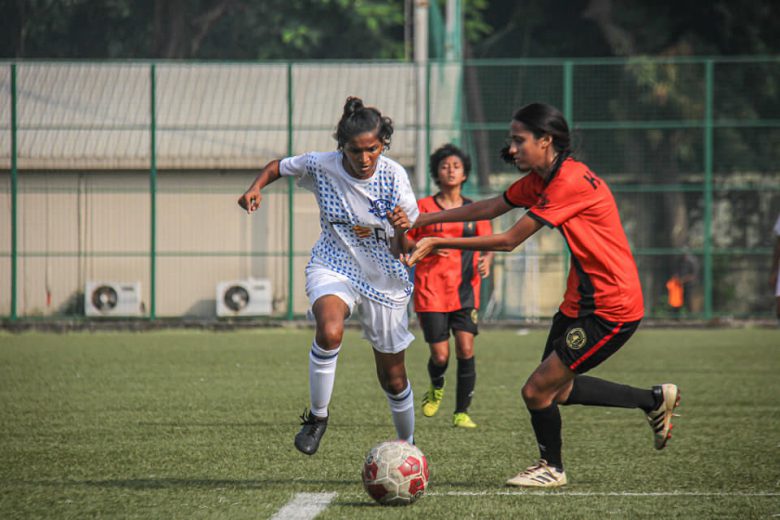 Spark FC displayed their intent by scoring at the very first minute of the match through Atiriya Narayan’s strike. Ritika Govas added to the tally soon as she found the net at the 4th minute. Abeer Arsiwala continued the momentum by giving a comfortable 3 goal lead to Sparks at the 31st minute. The first half concluded with Spark FC leading by 3 goals.

The second half commenced with Spark FC humiliating their opponents. Akanksha Kandalkar increased the lead at the 48th minute and Atiriya Narayan killed the match at the 80th minute. Spark FC have 5 points from 4 games whereas South Mumbai have scored the same points playing 5 matches.

The second game of the day hosted PIFA SC and Snigmay FC in which the former eased past their opponents.

Aishwariya Jagtap, who eventually scored a hat-trick, broke the deadlock for PIFA SC at the 26th minute. She scored her other two goals simultaneously at the 37th and the 38th minute. Namrata added to the tally soon as she scored at the 43rd minute. Prerna concluded the first half by striking at the extra time giving PIFA a commendable 5 goal lead.

In the second half, PIFA completely dominated the proceedings. Tripati Deep increased the lead by scoring at the 78th minute. Leah Poonawala, who was introduced replacing Namrata, caught the eyes with her sleek passing abilities and positioning sense. She eventually scored for her team in which she intercepted a ball and took a long-range effort to beat the opponent keeper.

PIFA Sports sit at the top winning all the 4 games and now look forward to taking part in the super six round. On the other hand, Snigmay is placed in the third position with 7 points from 4 matches.