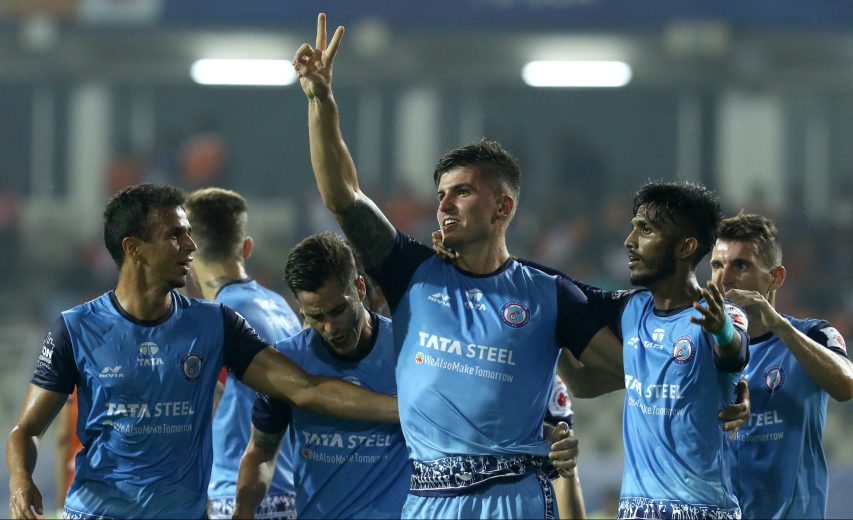 The 24-year-old Sergio Castel, leading the attack for the Men of Steel has four goals in five matches so far after his match-winning strike against FC Goa on Tuesday.

The Hero Indian Super League (ISL) has a new youngest leading goal scorer this season in the form of Jamshedpur FC’s Sergio Castel.

A 17th minute goal from Castel in a 1-0 win over FC Goa helped his side join ATK at the top of the ISL table with 10 points. However, the Spaniard was not entirely content with the score line. “To be honest, I could have scored more goals. I still have to improve a bit up top in making decisions. But, I am happy my goal helped the team get three points,” said the 24-year-old.

Castel’s move to Jamshedpur is a fruitful output of the club’s association with Atletico Madrid. The player is under contract with the La Liga giants and was loaned out to the ISL side in the summer.

On Tuesday, Goa were put to the sword for the very first time at home this season as Sergio Lobera had the likes of Ferran Corominas injured while Hugo Boumous and Seiminlen Doungel suspended. Castel felt that Jamshedpur had to still face a stiff challenge and it was only better tactics that prevailed.

“Goa were missing some of their good players but we were also missing Piti, our playmaker. It is not about excuses, we were smarter. Credit to our coach (Antonio) Iriondo, who changed the tactics to nullify Goa’s midfield so we could attack on the counters,” he said.

Castel was also complimentary on his partnership with India international Farukh Choudhary up top, who provided him the assist in Goa. “Farukh was absolutely brilliant. The ball came quite fast towards me but the delivery was good by Farukh. I did not have much time to react but I saw and chipped the ball and it was a goal,” he said.

Having played in Spain’s second division, Castel believes the ISL is a better league and facilitates the development of footballers. “At the moment I am focused only on Jamshedpur for this year. I want to help them reach the qualifiers for the first time and try to win. I still have two more years left with Atletico Madrid. I don’t think too much about the future, I just live at the moment. Maybe I’ll continue or go back. I don’t know.

“In India, they have facilities, better stadiums, very good fans. In Spain, I played in the second division. It is a difficult league with very good players so it is hard to do well because of the competition. For me, this is a much better league. It is good for players to grow,” he opined.

He added, “For me, it was a great opportunity (to come to India). Because of my age, people think that I should play in top leagues like La Liga or Premier League. Maybe someday I will, but I had the opportunity to join a league like the ISL and I heard about the fans and the people of such a great country like India I didn’t think too much.”

Meanwhile, Jamshedpur FC make the long journey next to face NorthEast United. “For NorthEast United, we have to stay very humble. We have to work a lot this week and keep an eye on their game as well,” Castel commented.