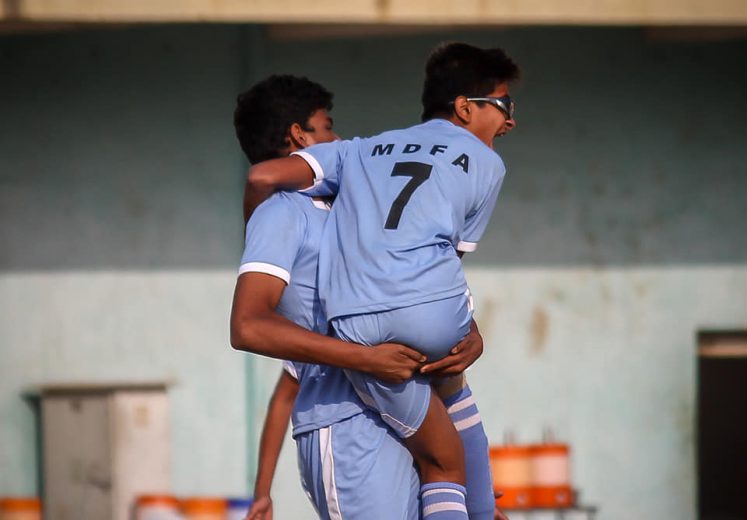 The semi-finals of the 2019 WIFA Inter-District Championship Sub-Junior Boys had two brilliant individual performances which had fans on the edge of their seats. Mumbai and Pune is all set to face each other in an anticipating final on Saturday.

Hridya Haria’s wonder-goal helped Mumbai beat Kolhapur in the first game. The ball was controlled and let rip from 20 yards out into the net! Surely a contender for goal of the tournament! Kolhapur countered Mumbai’s artistry with physicality. Full marks to Mumbai as they defended well and kept Kolhapur at bay.

Prashant Salawade, Sanket Medhe, and Gandharva Chavan were rendered ineffective thanks to tight man-marking by Mumbai. Kolhapur ran out of ideas as the deadly trio was marked out of the game. Mumbai withstood late pressure and won 1-0.

Tushar Durga grabbed the limelight as Pune beat Nagpur 4-0 in the second semifinal. Durga was at his devastating best as he scored a hat-trick. He scored in the 26th, 40th and 59th minutes to send Pune into the final. Akib Ansari was the other goal-scorer for Pune. Durga’s first goal — a long-range strike from 20 yards out – was an absolute peach! His second and third goals were scored from inside the penalty area. Manav Simon impressed for Nagpur with his dribbling. Utkarsh Mankar – Nagpur’s goal-scorer in the previous rounds – had an off-day.

Dr. Asmita Patil (co-ordinator, Beti Bachao, Beti Padhao) did a ceremonial toss before the second-half of the Mumbai-Kolhapur game.

Also, Mr. Farooq Shaikh (secretary, JDFA) was outstanding in the commentary box. Fans were impressed by his football knowledge as well as his insights on every game.

Mr. Vinod Nalwade (director, Rush Soccer Academy, Mumbai) gave a short speech in the end. He elaborated on the importance of fitness, diet and education for kids who want to break into the professional circuit.

The grand finale awaits on Saturday.