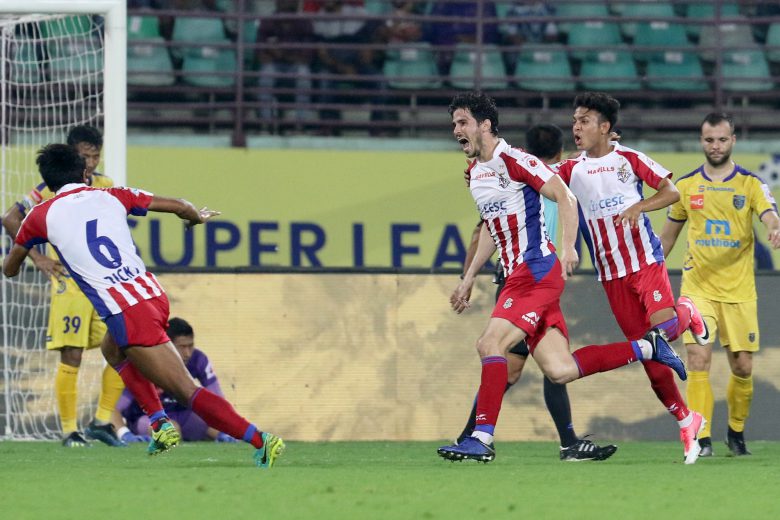 Nelo Vingada rang in the changes in his first match in charge of the Blasters with Nikola Krcmarevic and Matej Poplatnik given starts. ATK coach Steve Coppell welcomed Kalu Uche back into the team after the Nigerian forward returned to full fitness while new recruits Pritam Kotal and Edu Garcia were also included in the starting XI.

Poplatnik threatened early for Kerala with his header going just wide of the post while Garcia made a lively start for Kolkata at the other end. It were the hosts who saw more of the ball in the opening quarter of an hour, but they were unable to create any clear-cut chances against the rival defence.

A quick Kerala breakaway at the half an hour mark saw Prasanth Karuthadathkuni cross the ball towards the danger area, but John Johnson was on hand to prevent Sahal Abdul Samad from getting a decisive touch. Poplatnik once again threatened with a header following a cross from Lalruatthara but goalkeeper Arindam Bhattacharya managed to palm the ball away for a corner.

The visitors nearly took the lead against the run of play towards the closing stages of the first period with Garcia unleashing a fierce shot towards the top-right corner of the Kerala goal. Thankfully for the hosts, Dheeraj Singh produced a magnificent fingertip save to deny the Spaniard.

Dheeraj was called into action early in the second half to stop Gerson Vieira’s attempt following a cross from Ricky Lallawmawma. The young custodian was kept busy with Garcia driving a low shot from distance into his arms moments later.

The hosts should have taken the lead at the hour mark with Slavisa Stojanovic finding himself unmarked in the box but the Serbian blasted his shot high and wide with the goal at his mercy. Minutes later, Poplatnik got plenty of power behind his shot from Prasanth’s layoff but Arindam pulled off an excellent save at the near post.

Kerala’s poor finishing would come back to bite them in the closing stages with ATK earning a free-kick in a dangerous area. Garcia stepped up to take the set-piece and his low shot sneaked under the ATK wall to beat Dheeraj.

The hosts equalized just minutes later with Poplatnik putting the ball into the net. Prasanth’s cross from the right was headed down by Poplatnik which took a touch off Vieira to beat the custodian.

Also Read: The impact of the Asian cup will be huge for Indian football, states Gurpreet Sandhu

Also Read: Kick the Taboo returns for season 2 but with a twist