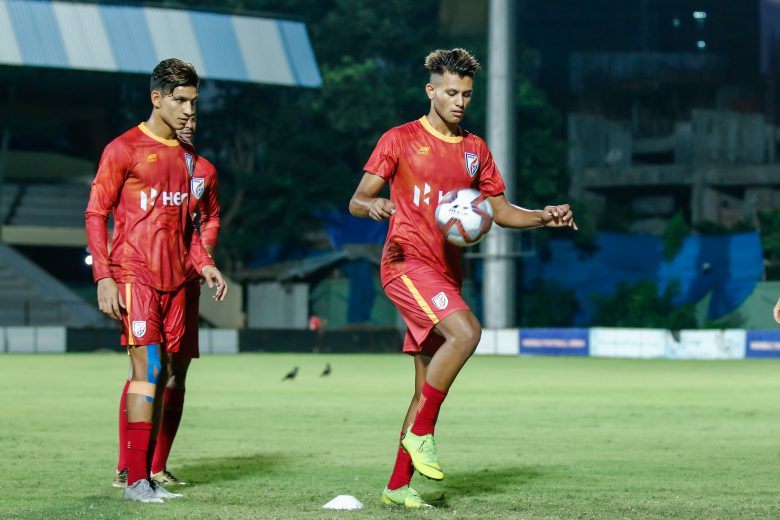 The ongoing preparatory camp for the forthcoming Hero Intercontinental Cup has youngsters Amarjit, Anwar Ali & Narender Gahlot in the camp, all of whom have been a part of the Indian Arrows project.

Indian Senior National Team Head Coach Igor Stimac has made his intentions clear of building a ‘team for future.’ In the process, Stimac who coached Croatia to qualify for the FIFA World Cup Brazil 2014 has already handed a debut to 18-year old Amarjit Singh, and have even praised him for his “excellent play.”

Amarjit isn’t alone. The ongoing preparatory camp for the forthcoming Hero Intercontinental Cup also has Anwar Ali, and Narender Gahlot in the camp. Incidentally, all these youngsters have been a part of the Indian Arrows project, with Amarjit, and Anwar having been part of the Indian U-17 World Cup team.

“Honestly speaking, the Arrows project has laid the foundation for us. It allowed us to bloom. I am just so grateful,” Amarjit Singh, the first player born in the 21st century to represent the Blue Tigers, stated. “Whatever I have matured as a player, the entire credit goes to the Arrows.”

The Arrows coached by Floyd Pinto came up with an inspiring performance in the Hero I-League 2018-19 to finish 8th among 11 teams. Mind you, they are a developmental project team with 19, 18, 17, and even a 16-year old in their ranks.

Amarjit expressed that the “invaluable experience” with Arrows helped them “reap the benefits” in 2018-19. “Had I joined any other club, I would have struggled to get enough game-time. That would have hampered my growth as a player,” Amarjit, who had captained India in the FIFA U-17 World Cup mentioned. “The glitz and glamour might be missing in our Arrows, but the results are there for all to see. We struggled in the first season, but gathered some invaluable experiences in the next.”

Narender Gahlot, a defender from the developmental squad who has been called up by coach Stimac maintained that “rubbing shoulders with foreigners, and experienced Indian players,” day in and day out helped hone the skills immensely. “Playing against quality foreigners, and experienced Indians helped me a lot. In the first season, we had little ideas about facing them. But we matured, learnt, and tried to implement in the second season,” Narender informed.

Anwar Ali explained: “My confidence as a player has grown immensely as I have been playing against sturdy and quality foreign recruits. I have earned a call-up to the India U23 National Team, and the Senior Team camp. Now, it’s my duty to repay the faith that the coach has shown to me.”

The boys have been on regular international exposure trips. India U-19 National Team, which predominantly comprised of the Indian Arrows boys, pulled off a stunning victory against Scaloni-coached Argentina U20 side in the COTIF U20 tournament in Spain last season — a testament of how far the Indian boys have improved.

“We had gone to the COTIF tournament in Spain, followed by another trip to Serbia during the pre-season. Those pre-season trips helped us a lot to get along, and grow as a team,” Narender added, “It’s always nice to play more matches, and that’s exactly what we got from Arrows – both at the domestic, and even International level.”

“We have so much to learn from the senior players. I tried to grasp as much as possible from my first camp. Although I couldn’t continue because of my injury, I’ll not let this opportunity slip, and aim to break into the final team for Hero Intercontinental Cup,” Ali maintained.

Narender was equally sentimental. “I have just stepped into the football world. I know this is, probably my best opportunity to learn more, and elevate myself to the next level under coach Stimac. My primary target is to devour as much football acumen as possible from the camp,” he expressed.

Tickets for Hero Intercontinental Cup 2019 up for sale online
Pune Coach Krishna Kutepalli: We need to start coaching them early