Saviour Gama has signed a contract extension with FC Goa, keeping him at the club till the summer of 2021 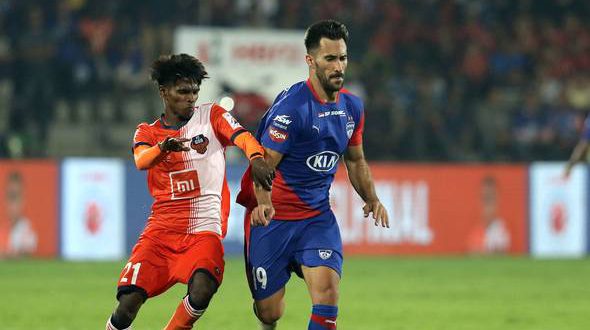 The 22-year-old left-back was one of four players to make the step up to FC Goa’s first team from Clifford Miranda’s developmental squad which won the Goa Football Association (GFA) Professional League in the 2018-’19 season.

Alongside Mohammad Nawaz, Liston Colaco and Princeton Rebello, Gama made the step up to senior football on the national stage, making six appearances in the Indian Super League and the Hero Super Cup.

Gama was visibly delighted with extending his stay at the club after a stupendous breakthrough season which saw him come on as a substitute in the ISL final and pick up a winners’ medal in the Super Cup. “I’m very happy to be staying here at the club. I hope I can improve a lot more in the next two years and beyond. I’ve been in Goa my whole life, and was born here. It’s my home,” exclaimed Gama.

Born in Margao, Gama made his initial strides in the game, earning rave reviews for his performances for Regina Mundi School, Chicalim. Gama also played for FC Bardez in the TACA Under-20 League and SESA Football Academy in the GPL before being spotted at a FC Goa trial by then assistant manager and current Head of Youth Development and Technical Director at the club, Derrick Pereira. His displays for the developmental side impressed Head coach Sergio Lobera enough to earn him a place on the pre-season trip to Spain.

He made his debut in a 1-0 league stage victory against Chennaiyin FC before coming on as a substitute for injured club captain Mandar Rao Dessai in the ISL final at the Andheri Football Stadium. Despite having less than two minutes to warm up, Gama hardly put a foot wrong throughout the match. His best performance of the season came against I-League champions Chennai City in the Super Cup semi-finals where his 6 clearances and 9 tackles helped the Gaurs shut out a formidable opponent, earning him the Player of the Match award.

Derrick Pereira, Head of Youth Development and Technical Director at FC Goa also praised the youngster on a season which saw him shine for the first team. “This contract extension is deserved and I hope Saviour takes this opportunity to improve even further. His performances with the development team showed us that he could improve our style of play and he has shown exactly that. If he keeps this level up, I see him making it to the national team in the future.”

We have to keep going, say debutants Mandar and Narender
Clifford (Miranda) and Mahesh Gawli inspired me to play for India: Mandar Rao Dessai