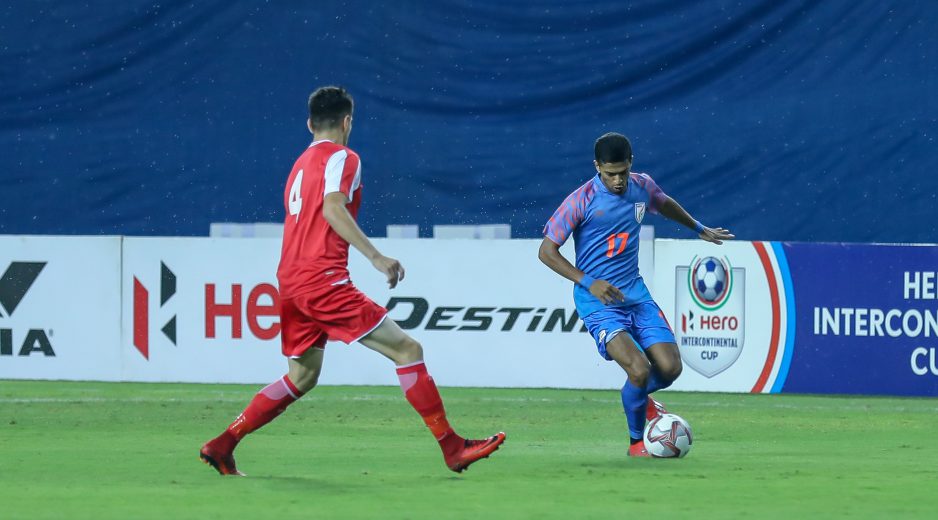 Two players took their senior national team bows during the game against Tajikistan, one of them being the vastly-experienced Mandar Rao Dessai.

He talked about how he aspired to play for the national team ever since he started his professional career and mentioned that the support from his seniors played a crucial role in his progress.

He said, “I have wanted to play for the senior team ever since I started out with Dempo. I had teammates like Clifford (Miranda) and Mahesh Gawli who played for India back then and they always inspired me and helped grow as a player. They believed in me and used to say that I will play for the national team one day.”

The winger-turned-fullback, who turned 27 earlier this year, was called up by head coach Igor Stimac after a stellar 2018-19 season and stated that “age is just a number” for him. “Age is just a number,” he said, before adding, “I have to keep my head down, work hard and keep moving forward. It was a great feeling to wear the Indian colours and be on the pitch. Now, I have to keep my place in the squad and I’m always ready to play whenever the coach wants me to.”

The Goan started the Tajikistan clash on the left side of the Indian defence – a role he started playing in only from last season. “I accepted the challenge and even though it was my first time playing left-back, I eventually settled and enjoyed playing in the position,” he recalled.

According to Mandar, his attacking style of play is something that makes him a valuable asset for Stimac, given the style of football he wants the team to play. He affirmed, “The coach believes that I can help in the attacking side of the game. It is my strong point and it’s always on my mind to go forward and help build up attacks. He wants the team to keep the ball and move up the pitch slowly, which is a style I am familiar with at club level as well.”

The Blue Tigers will take on DPR Korea in their next clash on Saturday (July 13, 2019) and the match will be critical for teams as they vie for a place in the final. Talking about the mood in the team, Mandar said that the players are “not thinking about the previous result” and will keep working harder in order to obtain a positive result.

“We had a great performance in the first half of the last match but the second half was not good. However, we are not thinking about that. We have two more games to go and are focused on them. We are a young team and as senior players, we have to encourage the youngsters and ensure we bounce back strongly,” he mentioned.

Mandar, who provided the assist for India’s second goal against Tajikistan, also hailed the fans who came to the stadium to cheer the team and stated that he hopes the “passion will only grow”. He said, “I was delighted when I saw the crowd in the first game and it shows that the people in Gujarat really have an interest in football. As time goes by, I hope the passion will increase and we will see more players emerge from here.”

Saviour Gama has signed a contract extension with FC Goa, keeping him at the club till the summer of 2021
AIFF request AFC to determine a fair solution for ISL-I league issue