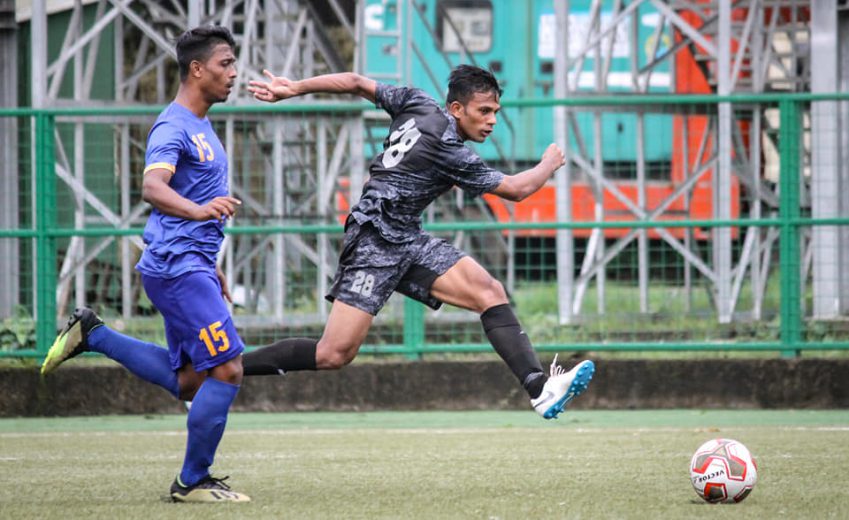 In what was a high profile encounter, defending Nadkarni Cup champions Air India faced off against defending Elite Division champions Mumbai Customs in the first semi-final of 2019 Nadkarni Cup.

Air India started off brightly with good amount of possession but were unable to breach the strong defence of Mumbai Customs. Midway through the first half, Air India were awarded a golden opportunity of taking lead when the referee pointed towards the spot after a foul inside the box. However, Johnson D’silva struck his shot wide off the target to give Mumbai Customs a relief. Striker Sanchit Singh attempted a bicycle kick not long after, but failed to connect as first half ended with score still a 0-0.

In the second half, Air India came out with all guns blazing as the team took 2-0 lead within five minutes of the start. Azza Norrani opened the scoring a minute into the game after Sanchit’s initial shot was deflected on to his path. Couple of minutes later, Rosenberg headed Azza Norrani cross in to the net to make it 2-0. Air India then controlled the proceedings with customs Goalkeeper Liyaz Koya being called in to actions more often then not, including two good saves to deny Vijit Shetty and Johnson a goal. The game ended at 2-0 as Customs failed to mount a late comeback, this time around.

It was a good game for us; especially after missing the penalty we didn’t lose hope and continued trying hard to win. I also played for customs for last 3 years so that experience helped in understanding our opponent.

At half time, our Coach told us not to worry about the penalty and keep on playing the game which we did and eventually we got the needed result. Now the focus is on the finals. We won’t lose the tempo and will work hard to win the cup.

In the second semi-final of the day, tournament’s surprise package – Mumbai City FC U18, faced off against another underdogs of the tournaments – HDFC, with the latter gaining a comfortable victory.

The Junior Islanders took an early lead when Sarvesh Bangar’s 11th minute attempt found the back of net. However, HDFC Bank bounced back immediately scoring four goals in the space of 20 minutes as HDFC headed to break with 4-1 score.

Pragnesh Solanki opened the flood gates in the 28th minute with a neatly finished penalty before a poor clearance from City keeper allowed Niyaz patel to capitalise and produce a clean strike for the 2nd goal. As the break approached Prashant Rane headed the third from a corner to make it 3-1 for HDFC. Seconds before whistle in a counter-attacking passage of play, Pragnesh completed his brace to take the score to 4-1.

Post break, Junior Islanders attempted to make a comeback but found it difficult to breach the defence of HDFC, who were happy to sit back with three goal comfortable lead. Minutes before full-time, a long ball forward found Wilsh D’Souza who placed the ball past the keeper to pull one back for the islanders. The game ended at 4-2 scoreline with HDFC now setting up title clash against defending champions Air India.

It has been an excellent campaign so far. We were the underdogs of this tournament, nobody gave us much chance but still we have made it to the final. Guys have worked very hard and the results shows. Now we aim to win the finals too. Against the MCFC reserve team, the coach asked us to keep it simple and aim to beat them in pace.

It was an excellent performance from us and I would rate it as 9/10 performance. The young lads of MCFC played well too and have a lot of potential which they can learn by gaining experience. Our preparation for final is quite simple. Rest as much as possible since it has been such a rigorous tournament. Maybe we would have a couple of practice session before the final.