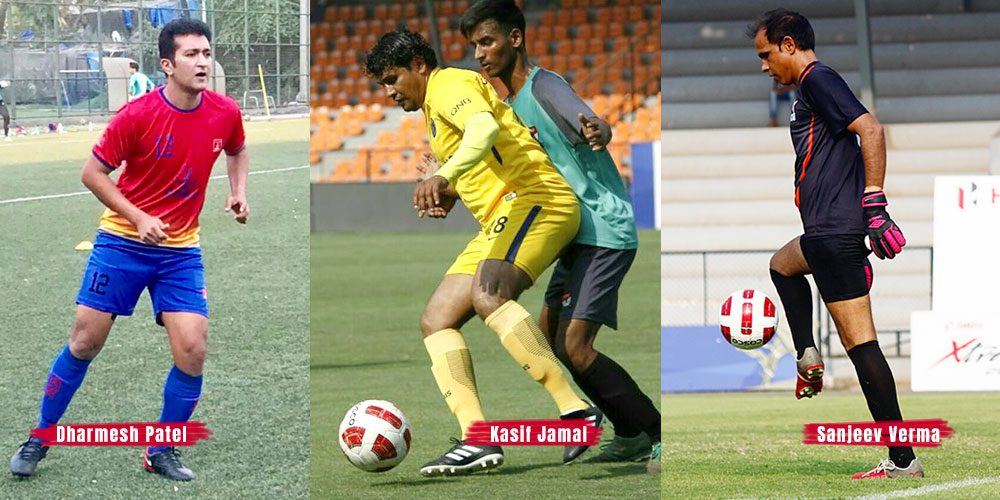 Defying their age, Veteran players plying their trade in Mumbai Football over the last couple of season have shown that they can still pull strings on field and lead the team.

For Sanjeev Verma, Kasif Jamal, Dharmesh Patel and other senior players playing in MDFA Elite Division, age is just a number and playing football is what matters.

At 43, Dharmesh Patel – Gujarat’s first I league player and former captain of the Gujarat’s junior and senior team, continues to ply his trade in Mumbai Football. When asked what kept him going so long, he gladly replied ‘Football’. The veteran footballer made his I league debut with ONGC back in the year 2010-11. Over the years, the defender has stuck by the team through thick and thin. Despite being a defender, Dharmesh Patel would often play crucial role in central midfield for ONGC, setting up goals or breaking opposition attacks.

Sanjeev Verma and Kasif Jamal have over the years played for Bank of India and Central Railway respectively. The importance to ‘fitness’, these players give has played an instrumental role in their long-lasting football career. Having studied strength and conditioning courses over the years, Dharmesh has applied the learning’s to his routine, “If the players are disciplined to take care of their bodies with proper nutrition, rest & sleep then they can extend their playing careers beyond 35 years. Then it will depend on their determination.” Echoing a similar sentiment, Sanjeev Verma states, “I loved the game so I concentrated well on fitness and diet”

One doesn’t need to look beyond Kasif Jamal to see how ‘determination to play’ can see you do miracles. During his stint at TFA, even before his professional career began at the age of 15, Kasif Jamal faced a career threatening injury with doctors suggesting the then TFA director PK Banerjee that the kid’s football career is over. Unknown to this news, Kasif Jamal practised and trained for 2 years regularly concentrating on getting back on the field. And two years later, he was indeed back on the field. Kasif went on to play for Churchill brothers, BMFC, Mohan Bagan, Mohammedan FC, Mahindra United and finally settling into Central Railways. Talking about his struggles during the injury, Kasif explains, “One must have a strong will power. During my tough times, PK Banerjee sir had helped and supported me a lot. Even today at the age of 43, I practice alongside young generation of footballers and motivate myself to keep my fitness level high for games.”

All these teams have been greatly benefited from the presence of these experience campaigners. They might not play every game but every once in a while when the team is in need and they are called upon, they most often than not end up delivering. Apart from the experience of playing big games, young players also benefit from having these experienced campaigners around in the dressing room.

For young footballers the advice is very clear from these veterans ‘Discipline’, ‘Hard work’ and ‘Be coachable’. Giving special emphasis on the latter word, Dharmesh wants players to take 1 day at a time. He states, “Be disciplined, on time, & show respect, have a learning attitude. Be coachable & enjoy every moment of football. Be prepared to work hard because great things don’t come easily, if it had then anybody would achieve it.”

Sanjeev Verma meanwhile has a bit separate advice for youngster, “Today’s young generation are spending more time on gym than on field. Mistakes that we commit in games can only be corrected on ground. During off season, along with maintaining fitness, we need to work on our basics too. We have to challenge our self and set a goal.”

Despite the lack of glamour quotient attached to the game especially at the local level, the commitment of these senior players, who still put their heart out for their teams, is quite commendable. Dharmesh states, “Remember this quote that ‘if you love it you will find a way otherwise you will find an excuse.’ When I started my playing career at Mumbai with Madanpura in 1994 & later with ONGC in 1996, I never thought that I would play club level football for more than 25 years. But I did”

With WIFA and AIFF regularly conducting coaching licensing courses, quite a few former players or senior players are already looking forward to coaching as an option. Kasif Jamal, having completed his C- licensing, will be donning the role of head coach role for youth team of a Mumbai based club – Indian Football Academy. Kasif plans to go into full time coaching once he calls off his playing career.

However for few players, who played with sides like ONGC, Air India, their future to some extent is at the hands of the company. “A lot will depend on the management of my company. Where they post me or how they are going to make use of me. As for me, I’ll try to acquire my coaching licenses as it will definitely help me to learn the modern trends & methods of coaching the sport, before I start sharing my experience with the youngsters.”, stated Dharmesh who is also an employee for ONGC.

Talking about the current scenario of football in India, Dharmesh expressed disappointment, “Just years before ISL, players lacked quality competitive football, Public Sector teams like ONGC, Air India were barred to play in national leagues weakening the I-League further. Now with ISL into the fold, a lot of clubs including Goan clubs have withdrawn from the league since there is no proper structure in the Indian league. Few good players are acquired by some of the ISL clubs but a lot of players remained stranded due to lack of games.”

Talking about Mumbai Football, Dharmesh further adds, “If top teams do not grow, how the lower leagues can improve? It is sad to mention that there’s not a single I-league team in Mumbai. The change I would recommend is that MDFA should stick to 1 league format instead of Corporate & Private, which has lead to tournament becoming more like ISL style knockout tournament & not the league.”

Irrespective of what the future holds, these veteran contributions to the Mumbai Football over the years as players and hopefully, the upcoming years as Coach cannot be ignored and is the one that deserves applause.