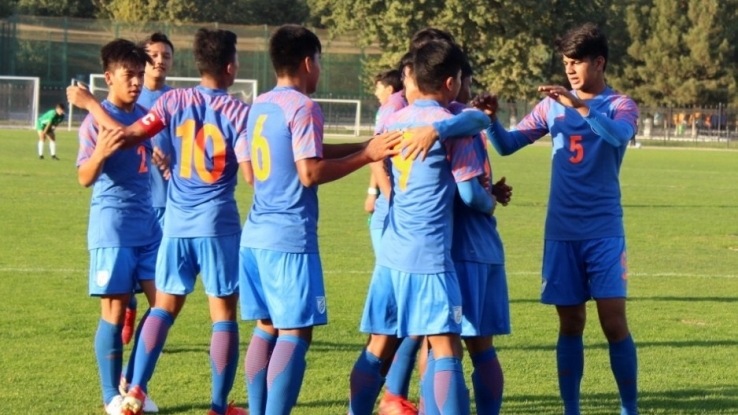 TASHKENT (UZBEKISTAN): The India U-16 boys’ Team increased their winning streak to 12 games, this time, vanquishing the Central Asian side Turkmenistan by 5-0 on their opening match of the AFC U-16 Championship Qualifiers, on Wednesday, September 18.

Sridarth, scoring a brace, flared as the star performer in yesterday’s outing. While Shubho Paul was not too far behind. He scored a first-half goal, and provided an assist for Taison Singh in the second half. Substitute Himanshu Jangra scored the last goal in the second half at the dying moments.

Playing at the Transport Institute Stadium, home to the reserve side of reigning Uzbekistan Super League winners Lokomotiv Tashkent, India dominated their opponents from the first half itself. Although, India failed to have a good start in the opening exchanges, they soon gained control of the match.

Both sides pressed each other in the start. Anish Mazumder and Singson stood robust in the defence, who stopped the Turkmen from attacking. The combination of Pritam and Taison down the right flank, looked dangerous for India. India had their first real chance when Sridarth took the ball into the box, crossed it in for Shubho, whose mistimed header saw the ball sail over the bar from inside the six-yard box.

Just ahead of the half-hour mark, the Indians broke the deadlock through winger Shubho’s strike. Sridarth played through into the Turkmen box from the right flank. As Sridarth made his way through, faked a dummy, and attempted a strike, his shot was initially saved. Shubho awaited for the chance to whip it into the net via a rebound.

Turkmenistan attempted to mount a comeback for large parts of the first half. However, the Indian midfield duo of Yoihenba and Sibajit maintained solidity in the middle of the park. Just a few minutes ahead of the half-time break, Sridarth doubled the lead. Taison forced himself into the area, played a cutback, which was duly turned in by Sridarth, from inside the six-yard box.

They may have gone into the break with a two-goal lead, but Bibiano’s boys picked up right where they left off. A few minutes into the restart, Taison Singh added the third, as he smashed in a Shubho Paul cross from just outside the far post.

It was after this goal, that India gaffer Bibiano Fernandes brought on striker Himanshu Jangra in place of Taison, pushing Sridarth out to the wing, and providing some physicality upfront. The physical striker had an immediate effect as he was played through into the box by Maheson and he went on to finish with great prowess.

Sridarth finished off the scoring late in injury time, as he plonked it over the keeper to make it five.

India U-18 boys prepared to challenge in the SAFF U-18 Championship
Tanaz Hassan Mohammed: A girl empowering women through Football