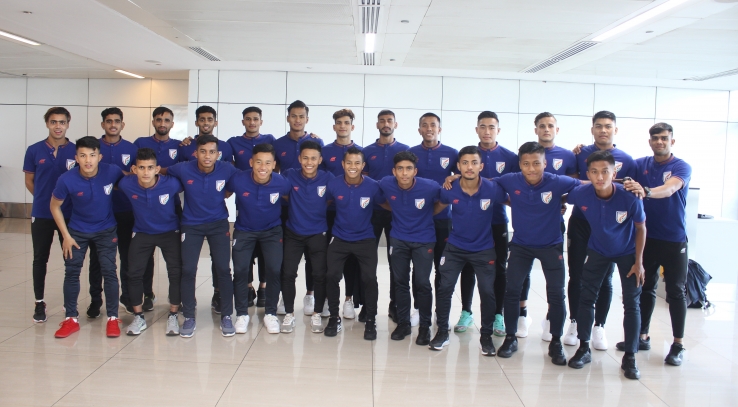 KATHMANDU (NEPAL): The India U-18 football team reached Kathmandu yesterday ahead of the upcoming SAFF U-18 Championship. The young boys, coached by Floyd Pinto are set to start their campaign against Sri Lanka on Monday (September 23, 2019).

The Blue colts head into the tournament after an intense training camp in Bhubaneshwar, lasting for weeks. The U-18 outfit will look to build on their successful run in Vanuatu last month, where they finished in first place. Floyd felt all the players are mentally fit to carry forward the “winning momentum.”

“After the good showing in Vanuatu the mood of the camp is very positive. All the boys are focused and determined to take the winning momentum into the SAFF Championship. We are confident in our abilities and have prepared well. We are looking forward to the approaching the tournament with positivity and putting our best foot forward in all our games,” he said.

The Head Coach also spoke about how the SAFF tournament will be a “step up” after the OFC Youth Development Tournament and help his side prepare for the “acid test,” — the AFC U-19 Championship Qualifiers, where India will be up against Saudi Arabia, Uzbekistan and Afghanistan.

“We expect stiff competition in Nepal from every team that we will face. We were successful in Vanuatu, and SAFF will be a step up from it. Hence, we need to keep improving ourselves and play with positivity,” Floyd stated.

“A good showing in Nepal will mean we can shift our focus towards the AFC qualifiers, which will be another step up and most difficult as compared to all the other tournaments. We hope to continue the momentum and if we do so, it will give us great confidence.”
A part of the 23-member squad will be defender Narender Gahlot, who made his debut for the Senior National Team under head coach Igor Stimac in the Hero Intercontinental Cup 2019, where he scored in a 1-1 draw against Syria, and also came on as a substitute in the Blue Tigers’ recent 0-0 draw away to Asian Champions Qatar.

“Having Narender join us from the senior team only adds to the experience that we currently have,” said Floyd.
The upcoming edition of the SAFF U-18 Championship is the third since the tournament’s inception in 2015, with Nepal winning both times in the past. India have been drawn in Group B and will open their campaign against Bangladesh on Monday, followed by Sri Lanka two days later.

India’s 23-member squad for the tournament is as follows: