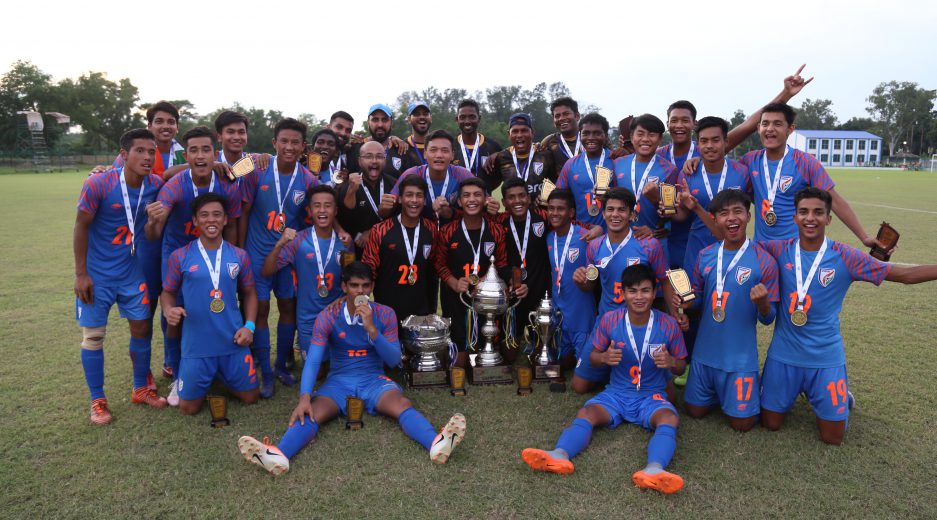 A convincing India U-15 beat Nepal 7-0 to lift the 2019 SAFF U15 Championships. Striker Sridarth scored a hat-trick while Maheson Singh, Amandeep, Sibajit Singh and Himanshu Jangra scored one apiece.

In the process, the Bibiano Fernandes coached side scored 28 goals in without having conceded any in the 5 matches they played in the tournament (including the final). The victory also meant that India are now the most successful team in the tournament’s history — winning the title for a record third time after previous wins in 2013 and 2017, both of which came in Nepal.

The first half was an electric affair right from the start, with the first scoring chance being created in the second minute itself. It was the Indian that started better and were rewarded for their efforts as they took the lead through Maheson Singh Tongbram in the 15th minute.

The midfielder ran into open space on the right flank and made the most of it with an excellent shot that sailed over the head of Nepal goalkeeper Manoj Dahal and nestled into the bottom corner of the goal.

It was a one-goal affair for most of the remaining half but India recorded two quick strikes towards the end to head into the dressing room with a three-goal advantage. Taison Singh, who was a live wire down the right flank, was fouled near the penalty area. He curled in the resulting free-kick, which was sent into the goal with a deft header by Amandeep in the 42nd minute.

Taison provided yet another assist to help India extend their lead. Beating his full-back, he squared the ball to an onrushing Sibajit Singh, who scored with a first-time shot. Changing over, the Indian side was quick to add to its lead, with Sridarth adding his name to the scoresheet with a poacher’s goal in the 51st minute. Taison fired in a powerful shot from distance that was not collected by the Nepal keeper and Sridarth was on hand to follow up and tap the ball home.

Himanshu Jangra, who scored a hat-trick each in India’s two previous matched against Bhutan and Bangladesh, came off the bench at half-time and scored his team’s fifth goal of the match — thus recording his 7th goal of the championship, and bagging the highest scorer award.

This time too, the provider was none other than Taison as he won the ball off the Nepal defence after some excellent pressing. He then proceeded to race past the defence and cross the ball to Himanshu, who leapt and headed the ball home in the 65th minute.

Five goals soon became six with 15 minutes left to play as Sridarth added his second of the match. The striker was played in by Shubho with a delightful through-ball and Sridarth showed great composure to round the keeper and stroke the ball home into the empty net. In the 80th minute, Sridarth completed his hat-trick with India’s seventh and last goal of the game as he latched on to a fine, low cross from Himanshu and placed it past the goalkeeper.

“I would like to thank each one of my support staff, the AIFF management at Football House, and SAI for their support,” Bibiano maintained at the post-match press conference. “We are happy to be champions. We came here with an aim, and we have achieved it. This was a preparation for the AFC Qualifiers and it makes us confident about what we can achieve,” he added. “I am extremely happy the manner boys responded. They kept up the momentum and the intensity since the first match. I am extremely proud of them.”

Captain Anish Majumdar dedicated the victory to a ‘team effort’. “This wouldn’t have been possible without us sticking together as a team. I need to thank the Coach and all our staff for their guidance, and believing in us,” Mazumdar commented.

The next task up ahead for Bibiano Fernandes’ side is now the AFC U-16 Championships 2020 qualifiers, scheduled to take place from September 18-22, 2019. The Indians have been drawn in Group B and will face hosts Uzbekistan, Bahrain and Turkmenistan.