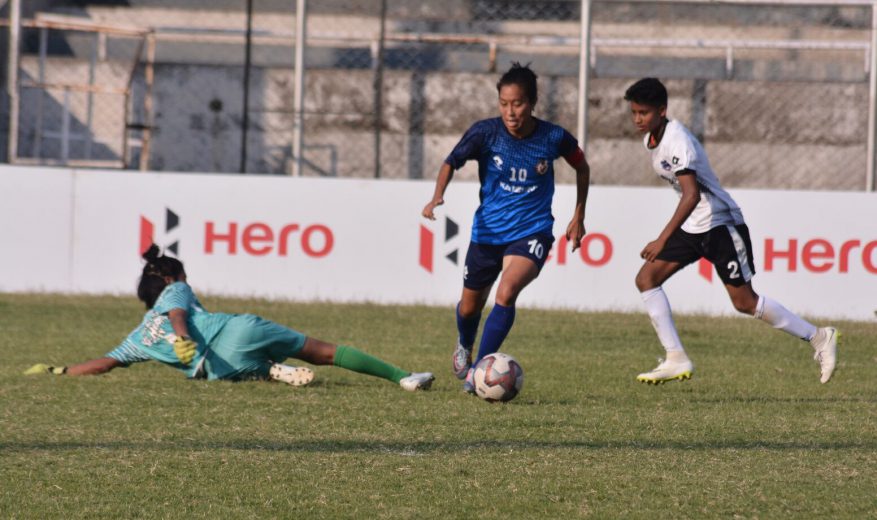 Manipur Police booked themselves a spot in the semifinals in style, defeating FC Kolhapur City by a massive 7-1 margin at the Guru Nanak Stadium in Ludhiana, on Tuesday.

Bala Devi scored another hat-trick, Irom Prameshwori Devi scored a brace, while Pramodini Chanu and Daya Devi added two more; the latter was awarded the Player of the Match award.

Much like in their previous games, Manipur had a fast start. They went 2-0 up in the first 15 minutes itself, with the likes of Iron Prameshwori Devi and Bala Devi getting on the score sheet. Kolhapur, though, were not prepared to give in so early, and went on the offensive immediately.

Their efforts to play their Nigerian forward Crystal Eke finally bore dividends, as she broke the offside trap, dummied Manipur keeper Roshini Devi, and walked the ball into the goal. However, Manipur made sure that they carried a comfortable two-goal lead into the tunnel, when Bala Devi scored another right on the stroke of half time.

Manipur came out with more intent in the second half, and even nullified the threat posed by Eke by playing a highly effective offside trap. The Nigerian was flagged several times by the assistant referee. Daya Devi added a fourth for Manipur when Bala played her into space on the right and the former beautifully chipped Kolhapur keeper Gyurme Dolma Tamang.

Manipur added two more goals thanks to Bala Devi, who dribbled past three players and laid it off for Salam Pramodini Devi to fire it past the keeper. A couple of minutes later, Bala completed her hat-trick to make a humiliating scoreline out of what promised to be an exciting match in the first half.

Player of the Match – Daya Devi

“I am happy to play here, a little nervous but I try to play well. I am happy we are closer to the qualification and for the 2 assists today.”