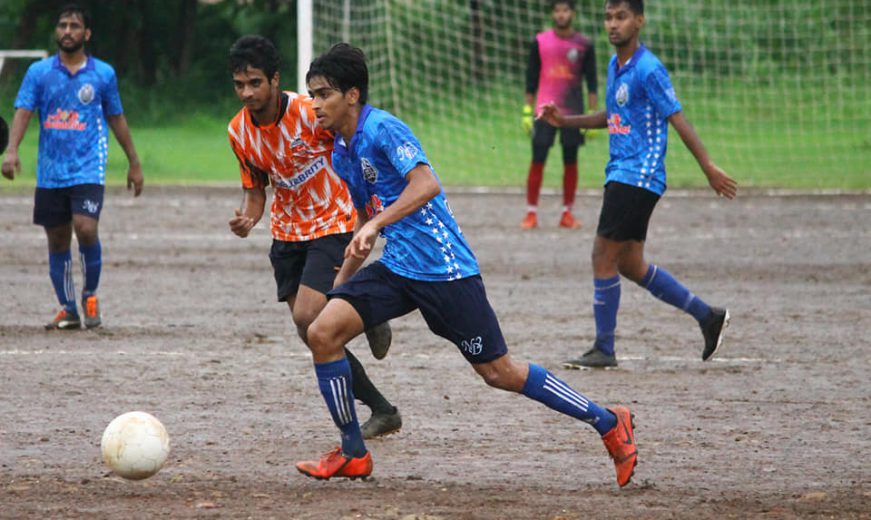 ND2 Soccer Starz keep semis hope alive after snatching a crucial injury time victory while Myrmidons Sporting twice came from behind to hold on to a draw.

After a cagey start, both sides grew into the game with some end to end football, but it was not until the second half the game saw some goals. Three minutes in to the second half, a cross from right flank was nicked into the goal by an alert Aditya Dalvi to give Tiger Sports the lead. A highly physical game saw Shidesh Shinde, Nishant Sakpal and Nihar Modi all pick up a yellow card for Milan Club while Niyaz Ahmed from Tiger SC received the booking earlier in the day.

With the game slipping from their hands, Milan Club finally found the equaliser when a through pass from the centre of the field found Sunny Thakur, who beat the off side track to find the back of the net. The draw meant both sides remained unbeaten in the tournament & occupying the top 2 spots in group B with Milan leading the charts.

In the second game, 10 men Challengers FC put out a brave performance only to be denied a point by an injury time goal scored by ND2 Soccer Starz. The win takes ND2 Soccer to the third spot in the group B table with semi-final spot still in the horizon.

In the opening game of the day, Myrmidons Sporting SC started off brightly with some quick attacking moves however it was Gorai FC who took the lead first when Niraj Bhandari’s strike found the net. Just before half time, Mithilesh Kasare scored the equalizer for Myrmidons as both sides entered the break with the scores tied.

In second half, Gorai FC once again took the lead with the help of Mandar Kurlekar before Myrmidons once again made a comeback in the 55th minute when Wayne Trinidade found the equalizer. Gorai FC goalkeeper Ankesh Mishra was the star of the game as he came up with crucial saves to keep his side in the game.

In the second game of the day, Friends United suffered a blow to their semi-final chances after going down 1-2 to Maryland United. Earlier, goals each from Colin and Yelstyn had put Maryland in a comfortable 2-0 lead. Despite some late fight back attempt from Friends United where they managed to pull one goal back to 2-1 score line, Maryland finished the game with all three points keeping their semi final chances alive.

In the final game of Week 4, Defending Champions Fleet Footers FC faced off against a resilient Vibrants FC. In a close encounter, Vibrants defence stood out in performances, keeping the dangerous Striker force of fleet footers in check. After a goal less first half, Vibrants FC took a surprise lead through Suraj Thummar’s goal, however, subsititute Dhaval Waghela pulled the game back in to level terms with a headed goal in the 53rd minute.

Few minutes later, Fleet Footers were back in lead when Agnelo Picardo’s shot from a tight angle beat the keeper to find the net after some good work by Karn on the wings. The game ended at 2-1 as Fleet Footers maintained their top spot in the group A table along with the winning streak.