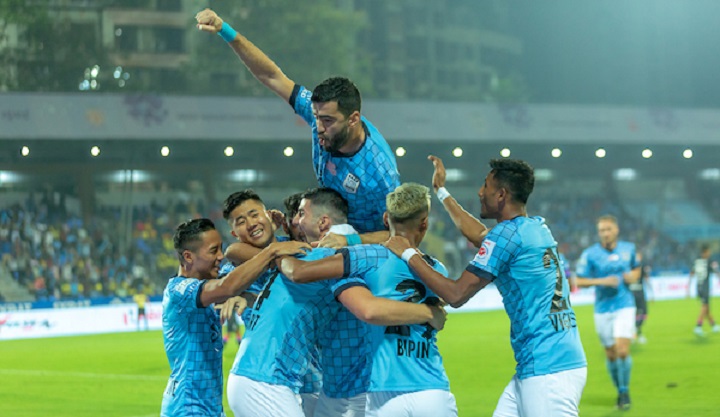 Head Coach Buckingham says, “It’s more important that we continue to do what we do from minute one through to 95” as fans keep fingers crossed

Mumbai City FC are on a historic run that the Hero Indian Super League (ISL) has never witnessed before, playing with clinical flair and flamboyance. With five games to go in the league stage, Mumbai City FC are still unbeaten, and currently stretching the record for most wins in a row, having wrapped up their tenth on the trot with a 4-0 victory against NorthEast United FC last night. Fans and experts have already started to see them now on track to match the famous ‘Invincibles’ season that Arsenal had managed during the 2003-04 season of the English Premier League. Should they manage to do that, they will be Hero ISL’s first club to remain unbeaten across the season.

With 45 goals in 15 games this season, Mumbai City FC are now only a goal behind the all-time league stage record of 46 goals. Their average of 3 goals per game is far ahead of the Arsenal team that had averaged 1.92 over the course of the season.

“I want them to be Invincibles because they are playing beautiful and swift football this season, and I have not seen any other club in India play like that. I hope they remain unbeaten till the end. Fingers crossed,” said a fan of the Islanders.

“I said to them that last week against Kerala, our first four shots were goals. So the scoreline was 4-0. Against ATK Mohun Bagan last week, the first six shots we had on goal in the opening 20 minutes resulted in one goal,” he said. “My message was very clear at halftime in both games and same for the pre-match tonight – it’s more important that we continue trying to do what we do from minute one through to 95 and we continue trying to do what we want to do regardless of the scoreline.”

To sustain this kind of dominance over a season, it is vital to have a steely defence. New signing Mehtab Singh has made the centre-back position his own, while goalkeeper Phurba Lachenpa has risen rapidly after being their second-choice goalkeeper and now has seven clean sheets to his name, the most by any goalkeeper so far.

But as the chatter and expectations about an Invincibles season grow, the club’s top goalscorer Jorge Diaz indicated that he and the team are focused on keeping up what the head coach wants of them.

“As of now, we are unbeaten. Right now, the focus is on [the next game], and after that, the focus will shift to the next match,” he said.

From back to front, Mumbai City FC have shown so far that they will give nothing away to their opponents. Should they manage to stay unbeaten in their next game against Jamshedpur FC on January 27, they will have gone unbeaten in 16 games, which will be another all-time league record above ATKMB and FC Goa, who have managed 15 each in the last two seasons. Once that barrier is breached, there is no telling what heights this team could scale. If they keep it up against Hyderabad FC in the first week of February, the Invincibles feat will not seem far away.