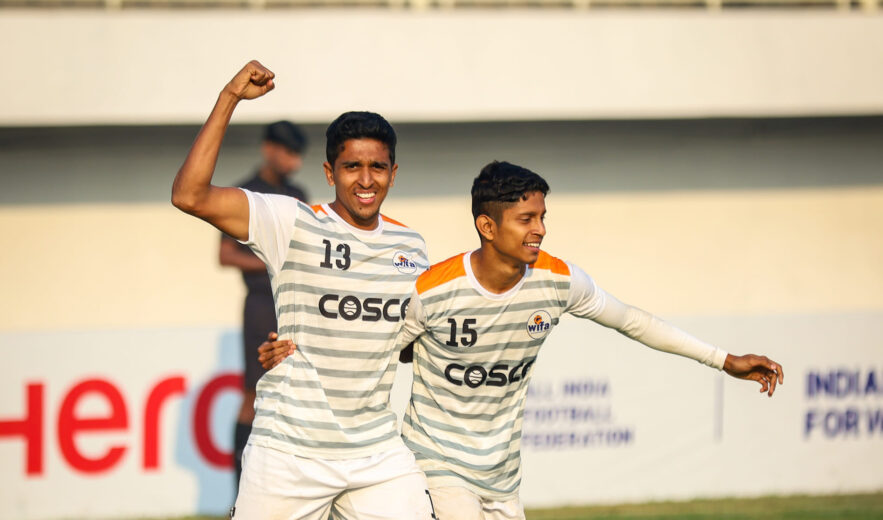 The game got off to a rapid start for Maharashtra as they were awarded a free kick in the very first minute, with Johnson Mathews’ shot being saved by the keeper for a corner. From the resulting corner, Arif Shaikh showed exceptional control to latch onto a cross into the box, tapping it into the net past the diving keeper.

In the 9th minute, Johnson Mathews turned from provider to scorer with a powerful shot from the edge of the box that found the top left corner of the post, making it 2-0. Around the half-hour mark, Sufiyan Shaikh won the ball in the middle, turning past his marker before releasing Arif through on goal. As the goalkeeper tried to come off his line, Arif curled the ball past his reach into the empty net to make it 3-0.

At the stroke of half-time, Haryana pulled one back when Jeevesh won the ball outside the Maharashtra box before releasing Hitesh through on goal, who placed his shot perfectly to the left of the onrushing keeper, making it 3-1.

The early parts of the second half were cagey, with both sides trying to find the breakthrough. Around the hour mark, Sufiyan found himself in space just outside the box as he unleashed a powerful shot on target, but it was denied by a brilliant one-handed save from Haryana GK Gurjeet Singh. Minutes later, Johnson Mathews’ shot from the right whizzed past the far post.

In the 68th minute, Arif had a glorious chance to complete his hat-trick after latching onto a pass inside the box, but his shot blazed over the bar from close range. A few minutes later, Sufiyan Shaikh from inside the box failed to hit the target after Ashley Koli laid off the ball for him in space.

The game trudged on with both sides making few attacking moves, but no further goals were added. The final scoreline read 3-1 in favor of Maharashtra. With this win, Maharashtra continues to be in the race for the top spot in group IV and will face fellow challengers West Bengal in their final group match on Sunday.