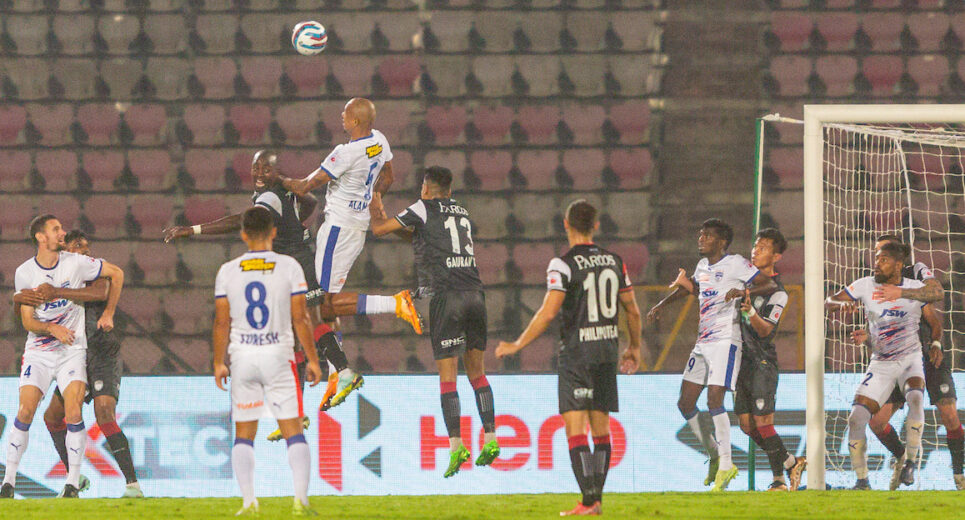 Bengaluru FC nicked a late win against Northeast United FC for the second time this season, as they ran away with a 2-1 win at the Indira Gandhi National Stadium in Guwahati on Friday.

Brazilian defender Alan Costa was the hero for Bengaluru FC once again, scoring in identical fashion with a header to seal all three points on the road and complete the double for his team.

The match had a tight first half, with both teams creating just one clear-cut chance each. Wilmar Jordan had the best chance for NorthEast United FC in the 9th minute. He was clean through on goal and went for a low curled finish, but Gurpreet Sandhu got down quickly to deny him after he hit his shot into the floor.

Sunil Chhetri was on the bench for Bengaluru FC, with Roy Krishna leading the line alongside Sivasakthi Narayanan. Krishna couldn’t get involved in the game for most of the first half because of NorthEast United FC’s stubborn defence – he only had 18 touches in the first half.

The one time they did find him, he played a gorgeous outside-of-the-boot pass into the path of Sivasakthi. Sivasakthi’s effort wasn’t a bad one, but Mirshad Michu was alert to the danger, made himself big, and denied the Bengaluru FC forward. The first-half ended 0-0.

Bengaluru FC were rewarded in the 50th minute. Parag Srivas set up Sivasakthi on the left flank after driving forward, and he expertly poked the ball over Mirshad and into the top corner from the edge of the penalty box to give Bengaluru FC a 1-0 lead.

NorthEast FC were struggling to get a foothold in the second-half, but had a decent stretch from the 62nd minute to the 65th minute. This stretch was enough for them to open their account for the evening. They were awarded a free-kick just outside the box, and Romain Philippoteaux beat Sandhu in the 66th minute. The Frenchman deceived the Bengaluru FC wall and keeper by going for a low shot across the goal.

Chhetri, who came on as a substitute, came very close to scoring a diving header in the 82nd minute after Udanta Singh, the other substitute, played a delightful cross from the right wing – but Mirshad made a crucial close-range save to keep NorthEast United FC in the game.

Bengaluru FC kept knocking on the door and got their winner four minutes into stoppage time. Udanta found space on the right wing, and played a perfectly lofted pass into the path of central defender Costa, who had stepped forward, and powered his header home to give Bengaluru FC all three points against NorthEast United FC for the second time this season.

NorthEast United FC remain in last place and will host FC Goa at the Indira Gandhi National Stadium in Guwahati on January 15, whereas Bengaluru FC will host Odisha FC at the Sree Kanteerava Stadium in Bangalore on January 14, with 13 points on the board after 13 games.

– NorthEast United FC goalkeeper Mirshad Michu made seven saves on the night
– Javier Hernandez’s four shots were the most of any player in the match. He also created five chances
– Roshan Noarem played six crosses in the game