Young Tigresses go down on penalties to Faroe Islands 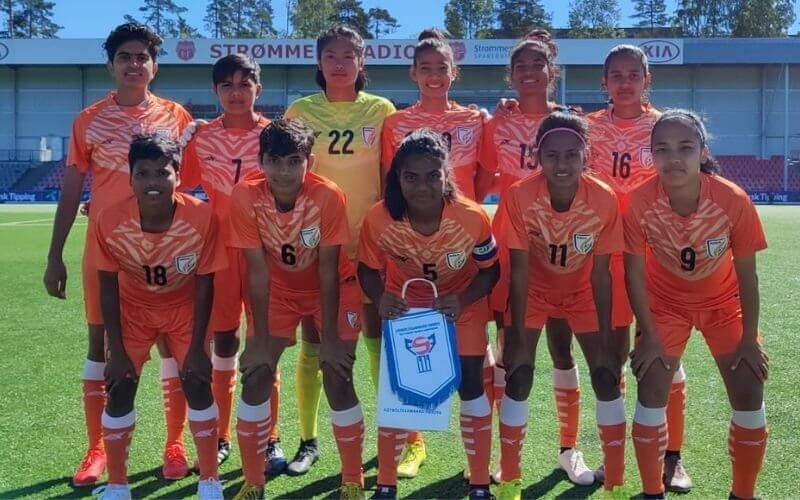 NEW DELHI: The India U-17 Women’s Team suffered a 2-4 defeat on penalties against the Faroe Islands, as the match ended with a goalless draw after regulation time at the Strømmen Stadium, Norway on Thursday, July 7, 2022.

It was a cagey start to the match as both sides looked to find a stronghold in the middle of the park in the opening exchanges.

India had a couple of corners early on, but Shjaila’s crosses into the Faroe Islands box were dealt with by the opposition defence.

A little over the 30-minute mark, India had a free-kick from close range, as defender Naketa laced it towards the top corner, but the opposition goalkeeper pounced to parry it away.

Minutes later, Lynda Kom Serto got on to a stray ball in the attacking third, and tried to make space for herself, but was dispossessed. Nitu Linda got on the rebound and smacked her effort straight at the keeper.

Dennerby made a couple of changes after the half-time break, with Kajol Dsouza and Rejiya Devi replacing Neha and Shjaila, respectively.

Lynda Kom was again in the thick of things when she nodded a corner goalwards but sent her effort whiskers wide.

With about 20 minutes left on the clock, India head coach Thomas Dennerby made more changes, as Misha and Varshika replaced Lynda Kom and Naketa, respectively.

Anita soon had a good run up the right flank, as she muscled her way past her marker, entered the box and squared the ball, only for it to be cleared.

With less than five minutes of regulation time left on the clock, a cross from Anita from the right found its way to Misha, whose header went just wide.

The referee added four minutes of injury time, and on the first of these minutes, Rejiya Devi made her way down the right into the box, squaring it towards the penalty spot, but her effort was cleared.

The match ended with a stalemate, with India hogging 59 percent possession of the ball, as it went into a penalty shootout.

Faroe Islands won the shootout by a 4-2 margin, despite a stunning save by Indian goalkeeper Hempriya Seram in the fourth penalty. Nitu Linda and Anita Kumari converted their spot-kicks for India, while Varshika and Kajol Dsouza’s efforts were saved.