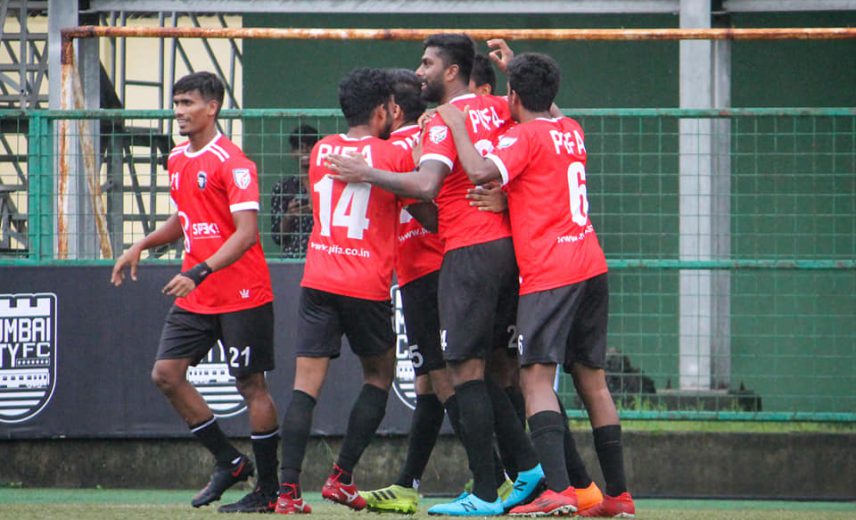 Bank of Baroda’s MFA Harwood Champions League title challenge suffered a big blow after a 2-0 loss to PIFA Colaba in their penultimate game of the competition.

An early goal from Calvin Barreto and a late second half strike from Nachiket Palav gave PIFA Colaba a 2-0 win over Bank of Baroda. The result put a huge dent in Bank of Baroda’s title challenge with the final league game against the in-form Ambernath Utd-Atlanta FC now turning into a must win game.

The game began with PIFA going on front foot in the 3rd minute itself. After winning a corner early on, Kaustubh Panchal swung in a delicious cross that midfielder Calvin Barreto buried into the BOB net with a powerful header.

The early goal boosted the PIFA confidence who were yet to register a win in the competition. Minutes after the first goal, Aimar sent in a dangerous cross into the box that Amrender Singh headed just wide. Kaustubh Panchal then had two shots saved by the Bankers Goalkeeper. The first one, Kaustubh cut inside his marker before firing straight into the Keepers hands while in his second attempt, he took a shot from outside the box that brought a diving save from the Bankers Custodian

Bank of Baroda finally came into the act of their own creating back to back chances. Saurabh Nikam, after winning the duel with Faiz, took the ball into the box before shooting and drawing an important save from the keeper. The rebound fell for Rakshit Pillai whose shot went wide of the post. Denzil then won the ball in the middle before cutting through the PIFA defence, however his shot too went wide as the score remained in favour PIFA.

Bankers finally paid for their Profligacy in attack as PIFA doubled the lead in the 75th minute, Amrendra Singh played ball to Calvin who sent in a deep cross in to the box where Nachiket made a late run past his marker to head the ball into the net and make it 2-0.

This was followed by PIFA taking their time and playing it with occasional attacking forays. They went close again when a long range attempt from Kaustabh was saved away by BOB keeper. The match ended with score 2-0 as Bank of Baroda now head into the final group game in a must-win situation.