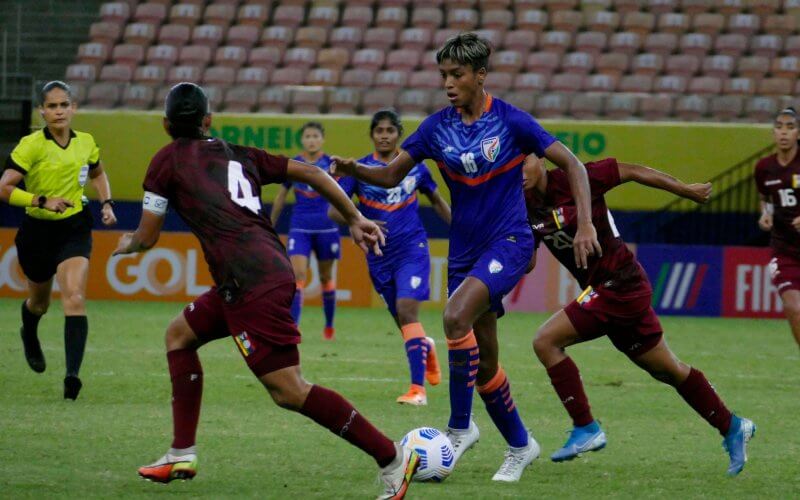 NEW DELHI: Women’s Football in India has been on the move, and one player that has epitomised the progress is none other than Blue Tigresses winger Manisha Kalyan.

While the 20-year-old shot to fame last year when she scored a famous goal against giants Brazil in their own den, Manisha is one who has now progressed to sign for Cypriot club Apollon Ladies FC, as they prepare for their UEFA Women’s Champions League qualification campaign.

“I had been talking to a few clubs recently, and Appollon’s offer intrigued me a lot, starting from their facilities to their aim of building the team further,” Manisha told www.the-aiff.com after reaching Limassol. “I did to a little research on the club and its players before coming here, and I am very hopeful that we can grow forward together.”

The 20-year-old feels that the exposure she has got with the National Team in recent times has helped her gain the experience and the confidence to take such steps.

“The kind of matches we have been playing against quality teams, they really help you get an idea of how to tweak your game in what kind of situations,” said Manisha. “I think there are more girls in the National Team who can make such moves in the future.”

Manisha has already had three training sessions with her new club in the Cypriot capital, and though the attacker feels it is first and foremost, a time to adapt, she does enjoy the intensity of the training sessions.

“The playing style is a little different here. It will take a little time to adapt, but I am really enjoying the intensity of training here,” she said. “My teammates have been really friendly and approachable, so I am hopeful that we will all gel together.”

Having been a part of the National Team setup since her U-17 days, Manisha is one who has gotten used to staying away from home for long camps. However, moving to a new country is an entirely new ballgame, something that the 20-year-old is also coping with.

“I’ve been quite used to staying away from home while playing for the National Team. What made it easy was that we were all like a second family,” quipped Manisha. “I’ve only been here in Limassol for a few days now, but life does feel a little different. It’s a completely new city, with new people around me. It’s a bit difficult at the start, but I’ll adjust. The main thing is to do well on the pitch.”

“The one thing that I already miss is Indian food, but those are the sacrifices one has to make as a professional footballer anyway,” laughed Manisha.

With Apollon set to play the UEFA Women’s Champions League in August, Manisha may be on the verge of completing her dream.

Manisha, along with her fellow winger Dangmei Grace have made their moves abroad earlier this month, with the latter signing for Nasaf FC in Uzbekistan.

The former believes that with the kind of progress the Indian Women’s Team has made over the past, more Blue Tigresses can make such moves in the future.

“Our girls have improved a lot. I feel there are girls in the team who can do even better. Such moves will only help the National Team to improve further in the future,” quipped Manisha. “I hope that I can inspire some of the younger girls to work harder and make their own moves in the future as well.”

‘U-17 WORLD CUP A BIG OPPORTUNITY’

With India set to host the FIFA U-17 Women’s World Cup later this year, Manisha feels more youngsters might come to the fore with their performances in National Team colours.

“The World Cup is a big opportunity. Not just because India will be getting to play those matches, but also because of the thorough preparation that the team is undergoing right now.”

“They have just played matches against teams like Italy, Netherlands, Iceland and so on. These are experiences that will stay with these girls and help them grow,” she quipped. “The exposure that they’re getting is huge and I hope that in the next 2-3 years, they come forward to make the senior team even stronger.”